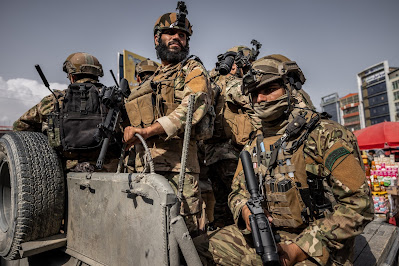 The Taliban are back in control of Afghanistan but they may soon regret their victories.

Afghanistan is a mess.  The former government's coffers were heavily padded with foreign aid. 8 of every 11 dollars the previous government had to spend came from aid that is now at risk.

The Chinese realize the Talib's predicament. Beijing is already planning to drive a new highway directly to Kabul eventually extending it to create an overland route for the Belt and Road initiative. China is also looking to stitch up control of Afghanistan's mineral resources knowing that beggars can't be choosers. There has also been talk of a 35,000 strong Chinese "peacekeeping" force to protect the Taliban from rival Muslim forces that might also be a great way to provide its new ventures with security.

The Taliban's problems, however, go far beyond where they'll find the sort of cash they need if the West walks. Climate change and the prospect of food insecurity could also undermine the Taliban regime.

Afghanistan embodies a new breed of international crisis, where the hazards of war collide with the hazards of climate change, creating a nightmarish feedback loop that punishes some of the world’s most vulnerable people and destroys their countries’ ability to cope.

And while it would be facile to attribute the conflict in Afghanistan to climate change, the effects of warming act as what military analysts call threat multipliers, amplifying conflicts over water, putting people out of work in a nation whose people largely live off agriculture, while the conflict itself consumes attention and resources.

“The war has exacerbated climate change impacts. For 10 years, over 50 percent of the national budget goes to the war,” said Noor Ahmad Akhundzadah, a professor of hydrology at Kabul University, said by phone Thursday. “Now there is no government, and the future is unclear. Our current situation today is completely hopeless.”
Afghanistan is not the only country to face such compounding misery. Of the world’s 25 nations most vulnerable to climate change, more than a dozen are affected by conflict or civil unrest, according to an index developed by the University of Notre Dame.
From Deutsche Welle:
Oli Brown, an associate fellow at London-based policy think tank Chatham House, told DW that food must get to Afghanistan's mountainous areas before winter weather makes some places unreachable.

"The big challenge in the short term is feeding people in Afghanistan," said Brown. Nearly half of the country's 30 million people live below the poverty line and a third is dealing with severe food insecurity.

"Obviously, the ability of the international community to do that now is reliant on decisions that the Taliban government takes — are they going to create the conditions in which people can eat?"
Afghanistan has a population just shy of 40 million. Of those, 4 million are already internally displaced. Climate change will only multiply the masses driven off the land in a vicious circle that leads to worsening food shortages.
Syria, Somalia, Mali and Sudan are in much the same boat. Insurgencies and rebel governments face a hard time just meeting their citizens' basic needs for survival. Some of their territories are bound to become uninhabitable.
A recent article took the pulse of the great Islamic revolution to spread the faith worldwide. There seems to be a collapse of support from mainstream Muslims who have other worries than feting radical Islamists. 40 years in the making, the movement may actually die out.
Maybe you don't lose a war if the other side doesn't win.  Afghanistan was already in the grip of this climate catastrophe well before the Talibs rolled into Kabul. If the Taliban had been rolled back and held at bay this would have been the former government's mess to deal with and they were no more able to deal with it than the new bunch.
(photo: Taliban fighters decked out in former Afghan National Army kit complete with modern American weapons patrol Kabul)