New Zealand Gets a Blob 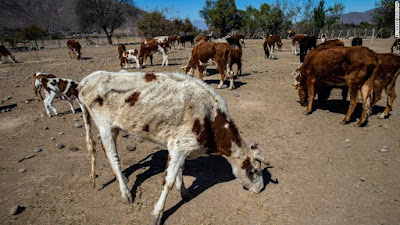 A "blob" in an area of unusual ocean heating, an oceanic heatwave.  We've come to associate it with the North Pacific where it was first detected in 2013.

Warmer conditions during “the Blob” left lesser-quality food available to young salmon entering the ocean. It also shifted predator distributions in ways that contributed to low returns of salmon.

Other impacts linked to the earlier heatwave include:
The largest harmful algal bloom recorded on the West Coast, which shut down crabbing and clamming for months.

Thousands of young California sea lions stranding on beaches (and dying of starvation).

Multiple declared fishery disasters.
Now New Zealand has its own Blob and it's playing havoc with the climate across the Pacific in Chile.
A vast patch of warming water off the coast of New Zealand – referred to as a “warming blob” – has contributed to a decade long drought affecting parts of South America, according to scientists.

Researchers based in New Zealand and Chile have examined the rapidly warming hot blob which rose to prominence in 2019 after spikes in water temperature of up to 6C were recorded.
“This big ridge of high pressure blocks storm systems that bring rainfall to central Chile in winter,” Kyle Clem, one of the authors and a lecturer in climate science at Victoria University of Wellington, said.

“When we took the blob out of our simulations that ridge of high pressure disappears.

“That was one our biggest pieces of evidence that the blob is a major contributor [to the drought].”

The ongoing drought has reduced fresh water supplies in Chile and prompted the science minister, Andres Couve, to say this month the decline of water reserves due to climate change was a national priority.
Our oceans not only absorb a lot of our greenhouse gas emissions but also heat from our warming atmosphere.  Surface temperatures rise but scientists realized that wasn't nearly enough to account for the amount of heat energy being absorbed. They discovered that much of that heat energy is captured in the ocean depths. As we know, energy can neither be created nor destroyed - the first law of thermodynamics or the law of conservation of energy. And so the question arises whether, when and how that energy will eventually return to the surface of the ocean and, perhaps, back into the atmosphere.
Photo: Cattle in Chile show the effects of sustained drought.