Because Drylanders Have Short Memories 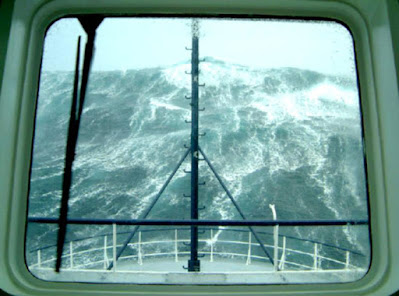 The Conservative leader yesterday confirmed that, if he becomes prime minister, a priority will be to resuscitate the Northern Gateway pipeline bringing bitumen to the port of Kitimat on BC's north coast.

It's been a while since we had to deal with this nonsense so I thought I'd tweak your memories.

In this first instalment I'll bring you the testimony of Sid Joma to the environmental review panel back in 2013.

My name is Sid Jorna. I’m a retired commander of the Royal Canadian
Navy with a bridge watchkeeping certificate, so I’ve had
experience at sea. With a Master’s degree in engineering, I’ve
had a second career as a Director of Engineering, General
Dynamics Canada, overseeing the development of naval sonar
equipment.

Knowing something of the marine environment, I will
therefore confine my comments to the issue of bulk oil carrier
vessels in the Dixon Entrance, the Hecate Strait and the Douglas
Channels.

In my opinion, bulk oil carriers in these waters pose an
unacceptable risk of a significant oil spill with extreme
consequences to the environment. I believe that a major tanker
accident in this confined sea is inevitable over time due to the
nature of the tankers and the nature of the sea and climate of
this region.

The very large crude carriers, or the ultra large crude carriers,
are huge, ponderous ships of 366 metres or more, 25 metres of
draft, and carrying some 2 million barrels of crude oil or more.
They have the capacity to spill roughly 10 times the oil that was
spilled by the Exxon Valdez.

By comparison, the Exxon Valdezwas a double-hulled crude
oil carrier with a capacity of approximately 1.2 million barrels
of oil. It spilled roughly 10% of that, causing all that
environmental damage in Prince William Sound.

Consider the destructive potential of a modern bulk oil
carrier. Bulk oil carriers are not very manoeuvrable. In the very
nimble destroyers of the Navy, we considered that the point at
which collision cannot be avoided by the action of one ship alone
is reached at approximately three kilometres owing to the huge
momentum and limited ability to manoeuvre of the bulk oil
carriers.

Another measure of the vessel’s huge momentum was its
stopping ability, needing at least 8 to 10 kilometres to stop.

These vessels are so large that they must constantly alter course
to the waves to avoid setting up harmonic oscillations which
could tear the vessel apart.

Douglas Channel from Kitimat to the Hecate Strait consists
of 140 kilometres of narrow, winding passages with multiple
islands, rock outcroppings and steep cliff banks. The narrowest
point is approximately 1.2 kilometres across between 90-metre high cliffs.

This is not a safe passage for such a large, ponderous ship.
Even in the best of conditions, with tugs in attendance,
conditions are not often the best. A ship would not be able to
ride out a tsunami in the Douglas Channel where the wave
would be magnified greatly by the funneling effect of the
Channel.

Hecate Strait is notorious for hurricane force winds and
gargantuan waves. An excellent description of possible
conditions here can be found in Chapter 10 of The Golden
Spruce [2005] by John Vaillant. I’ll paraphrase a few.

Hecate Strait is arguably the most dangerous body of
water on the west coast of British Columbia. On a regular
basis, its unique combination of wind, tide, shoals and
shallows produce a kind of destructive synergy. Katabatic
winds generated in the mountains funnel wind tunnel
style through the many fjords, like Douglas Channel.
Winter storms manifest as southerlies along the
coast. It is because of these winds that waves of over 30
metres—30 metres—have been recorded at the weather
buoy at the southern end of the Hecate Strait.

The Straits are so dangerous because these weather
westerly sea storm, blowing at 80 to 160 knots per hour,
collides head on with a north-easterly katabatic wind of
similar strength, the result is a kind of an atmospheric
hammer and anvil effect.

Tides that can run up to seven metres are another
ingredient. The transfer of such volumes of water in the
confined spaces like the Douglas Channel and the Hecate
Strait form the effect of a giant thumb pressed over the
end of an even larger garden hose.

The third ingredient is called an overfall which occurs
when wind and tide are moving rapidly in opposite
directions. Overfalls are steep, closely packed,
unpredictable waves capable of rolling a fishing boat and
driving it into the sea bottom. The overfalls can show up
anywhere but are intensified by sandbars and shoals like
those that extend for 30 kilometres off the end of Rose
Spit between Masset and Prince Rupert.

Large enough waves will expose the sea floor of the
Hecate Strait. The result is one of the most diabolically
hostile environments that wind, sea and land are capable
of conjuring up.

This description of frequent conditions in the Hecate Strait
does not instil confidence in the ability to manage with
technology. In these conditions the huge tankers may be
rendered helpless, their attending tugboats pathetic and no
match for the fury of the wind and the sea.

In the case of Dixon Entrance, Hecate Strait and Douglas
Channel, a tanker disaster is a predictable certainty over time
and an unrecoverable ecological disaster for everyone.

Rabid Liberal supporters will claim this is yet another reason to get out and vote for Trudeau. That's a predictable "Sophie's Choice" argument. Why don't you focus on getting your guy to shape up and fly right first?
I'll have another post on the madness of the Northern Gateway soon.