Could This Guy Become the Next Governor of California? 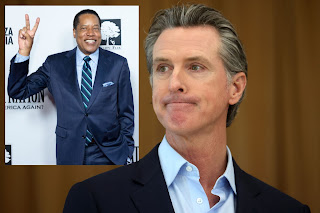 If this guy wants to be governor I can think of a few provinces in Afghanistan that might be a perfect fit. He's Larry Elder, a rightwing open mouth radio host and he wants Gavin Newsom's job.

The outspoken libertarian radio talkshow host entered the recall campaign just days before the filing deadline. He has zoomed to the top of a long list of candidates running against the state’s Democratic governor – perhaps both despite and because of his divisive, contrarian politics.

Elder opposes the minimum wage and gun control. He’s said he doesn’t believe that a gender wage gap exists, and has called the climate crisis a “crock”. He has suggested that fatherless families drive up crime rates in Black communities. In three decades on air, Elder has made a name disseminating controversy.

In response to his inveighing against affirmative action, denials of systemic racism and claims that Black leaders exaggerate discrimination, a group of LA residents in the 1990s organized a two-and-a-half-year boycott of the radio show’s sponsors.

Flyers circulating at the time called him a “White Man’s Poster Boy”. Some advertisers did drop Elder, but he ultimately prevailed. His show was syndicated, and he started building a huge national radio audience, making frequent appearances on Fox News and cultivating his brand of contrarian libertarianism.

“He’s been on the radio for 27 years, down in LA, talking man-bites-dog politics that are ironic and contradictory,” said James Lance Taylor, a political scientist at the University of San Francisco. “And in some ways, the only reason why he’s able to say much of what he says is because he’s Black … he uses his race as a weapon.”
First Past the What?
There are few requirements to get on the recall ballot, other than a $4,200 filing fee. But if more than half of California voters say they want to remove Newsom from office, the remaining candidate with a plurality of votes becomes governor.

That means Elder doesn’t need to win over the majority of voters – just enough to beat out Newsom’s other opponents. In a recent poll by the UC Berkeley Institute of Governmental Studies co-sponsored by the Los Angeles Times, 47% of likely voters supported recalling the governor, compared with 50% who opposed removing Newsom from office.
The people of California have some tough choices. Either keep Newsom or become saddled with the Republican option and, right now, that's Larry Elder.