Can We At Least Fix Our Infrastructure Deficit?

Last week saw a number of opinion pieces, in the Globe & Mail, the New York Times and the Washington Post, discussing the failure of political will across the West and what it portends.  Collectively they question whether Western civilization has entered irreversible decline (Hint, it sure looks like we have).

Canadian author and professor, Andrew Potter, summed up our malaise:

What these looming crises have in common is that they are marked by a failure of some combination of political conviction, state capacity and collective action. We have lost the ability to solve big problems and meet big challenges, and there is every reason to think this is only going to get worse, thanks to the effects of a number of long-standing trends. These include the economic and technological stagnation that has been in place since at least the 1970s, the rise of highly polarized and tribalistic politics, and the high decadence of the internet-fuelled culture wars.
Criminal Negligence Causing Death.
We could get 25 to life if we did it to a fellow human being. When a government does it to an entire population, our remedy is to elect some other bunch of incompetents to perpetuate the neglect.
Joe Biden is looking at a 1.2 trillion dollar infrastructure package. That sounds like a lot. It's not.  In 2013, while much of Calgary was underwater due to a severe flood that the city and province had plenty of warning was coming, the World Conference on Disaster Management convened in Toronto. 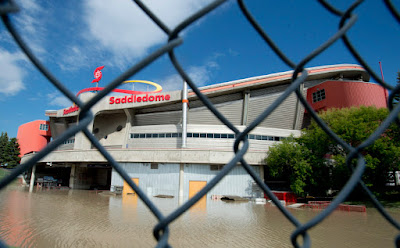 
Mirza estimated that Canada’s infrastructure requirements have reached a cost of about $1 trillion, while a recent survey by the McKinsey Global Institute earlier this year stated that worldwide infrastructure needs are about $57 trillion.

The lack of political will is one of the biggest obstacles to infrastructure funding, which is why Mirza proposed that Canada adopt a best practices solution to addressing our climbing infrastructure costs.

“What we need, and I’ve pleaded for it several times, is a national infrastructure policy in Canada because our governments have a tenure of four years, whereas infrastructure exists for 7,500 years,” said Mirza. 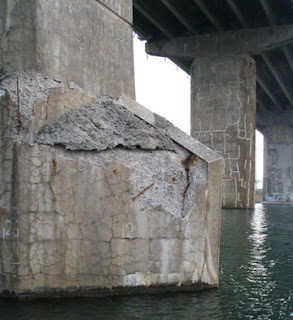 With infrastructure, as with climate change, we're constantly warned that the failure of government to meet its responsibilities carries a huge economic penalty. It's far cheaper to deal with our infrastructure problems now than to wait until they fail. It's a message that falls on deaf ears. 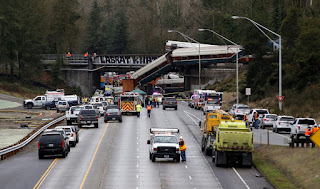 The government's response was to boldly promise to throw $20 billion at the problem - over ten years. 20 billion doesn't take much of a bite out of a trillion dollar looming catastrophe.  At that rate of investment it will take 500 years to come up with the necessary funding. How do you feel about cave living? 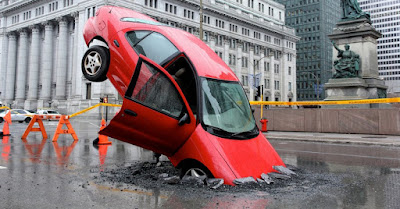 Our government's responses to major challenges such as climate change and infrastructure renewal is what Dr. Potter and others term "gestural." They're politically useful gestures that sound good yet will never get the job done. They do not rise to the challenge. They are not measured to the problem.  And so the great problems of the day pass from one government to its successor, on and on, worsening and becoming more intractable with every succession, decade upon decade. 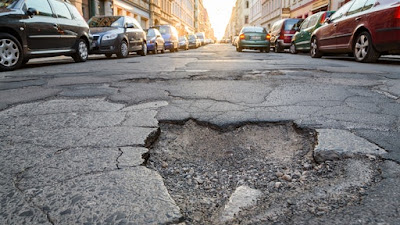 What goes unmentioned is that, as these problems worsen and costs soar, we become weakened, poorer, less able to respond effectively.
Potter put it best when he wrote that "we have lost the ability to solve big problems and meet big challenges."
Can we at least fix our infrastructure deficit? This aging, failing infrastructure is the lifeblood of the economy.  As it goes down, so do we.