Ah, Jeebus. Not the Atlantic Conveyor! 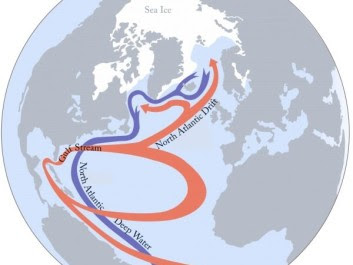 What next? Is the Gulf Stream, that does so much to regulate the weather in Europe and North America, on the verge of collapse?

The research found “an almost complete loss of stability over the last century” of the currents that researchers call the Atlantic Meridional Overturning Circulation (AMOC). The currents are already at their slowest point in at least 1,600 years, but the new analysis shows they may be nearing a shutdown.

Such an event would have catastrophic consequences around the world, severely disrupting the rains that billions of people depend on for food in India, South America and West Africa; increasing storms and lowering temperatures in Europe; and pushing up the sea level in the eastern US. It would also further endanger the Amazon rainforest and Antarctic ice sheets.  ...It could be within a decade or two, or several centuries away. But the colossal impact it would have means it must never be allowed to happen, the scientists said.

“The signs of destabilisation being visible already is something that I wouldn’t have expected and that I find scary,” said Niklas Boers, from the Potsdam Institute for Climate Impact Research in Germany, who did the research. “It’s something you just can’t [allow to] happen.”
Scientists are increasingly concerned about tipping points – large, fast and irreversible changes to the climate. Boers and his colleagues reported in May that a significant part of the Greenland ice sheet is on the brink, threatening a big rise in global sea level. Others have shown recently that the Amazon rainforest is now emitting more CO2 than it absorbs, and that the 2020 Siberian heatwave led to worrying releases of methane.