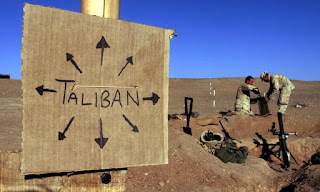 It's the political equivalent of musical chairs. When the music stops someone has to pay.

Justin Trudeau was prime minister when the Taliban rolled up Afghanistan's central government so it's his fault that Afghanis who worked with/for Canada during the West's ill-fated adventure got left behind.

Was it the prime minister's fault that he didn't realize the Afghan National Army, 20-years in the baking, would fold like a cheap suit, province by province, as the Taliban marched on Kabul?  Was the prime minister forewarned this collapse was a real possibility? Did he have reason to anticipate this fiasco?

How did Canada's effort compare with the rest of the crew? Shouldn't that be the yardstick by which we judge the Trudeau government?

What if word had gotten out six months ago that Canada was summoning its Afghani nationals to di di mau out of that hell hole on the double? What if our ISAF partners had done something similar? How much chaos would that have triggered?

This has been a dark farce from the get go. A Senate Foreign Relations Committee staffer testified in the early years that the post-Taliban government didn't stand a chance unless it first rid itself of tribalism and warlordism.  How is a nation of 16 distinct ethnic groups supposed to overcome tribalism? It happened once, under the last king, when the tribes were given a measure of semi-autonomy. That didn't survive the ouster of the monarchy.  As for warlordism, the Americans hand-picked Hamid Karzai, a warlord of the Durrani Pashtuns, to lead the country and, despite Washington's urgings, Karzai had no choice but to allow other bloody warlords to take key posts in his government. It was only Western firepower that kept those clowns in office these past 20 years.

A huge share of the blame for the current fiasco belongs to our generals, a bunch of careerist ticket-punchers to rival the American command in Vietnam. They kept blathering on about this campaign or that and how we were grinding the Talibs into the dust.  Did you ever hear a general admit Afghanistan was a civil war held in abeyance by the presence of outsourced military muscle, a big game of "whack-a-mole"?  They were trolling their soldiers through IED-laced backroads and alleyways to show the flag. Not one of them did the honourable thing by resigning in protest. Not one.

How long does it take to raise an army? How many years are needed to recruit, equip, train  and deploy a credible military force? 20 years? 20 years is tantamount to never. That much is evident in how rapidly the ANA forces folded, often switching to the other side and taking their modern Western weapons and hardware with them.

I think it would have been fair to draw a sharp red line under the Afghan government and the nation after 5 years, definitely at the 10-year mark. But we couldn't do that. This was, after all, a "frat house" war. 46 nations. 46 fraternity brothers. A 20-year kegger.

We went from a security role to combat to a training mission. That training sure yielded results, eh?  Even the South Vietnamese army in retreat bitterly fought the NVA into the heart of Saigon.

So Canada, like most if not all of its frat brothers, didn't get all of its locals out safely. That is certainly unfortunate but, beyond that, what does it really tell us?

All it tells me is that this makes great fodder coming in the midst of an election campaign. Beyond that, not very much, not much at all.