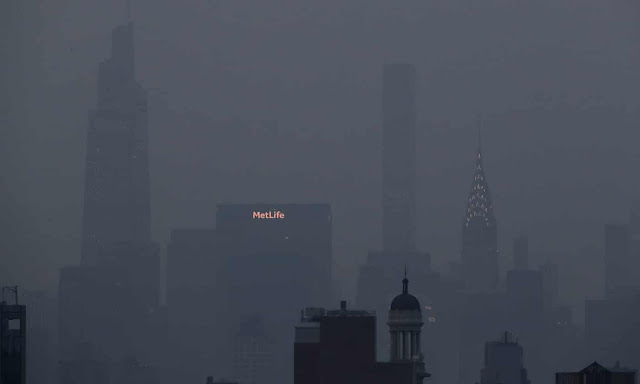 We've become accustomed to horrific air quality in Beijing or Mumbai, some of the worst on the planet. Now that laurel has passed to New York City courtesy of wildfire smoke from western Canada and the U.S.

Smoke from more than 80 major wildfires burning in the US west has caused hazy skies and plunging air quality in eastern American and Canadian cities including Philadelphia, Washington DC, Pittsburgh and Toronto, as well as New York, causing fiery sunrises and even bathing the moon in an unusual red tinge on Tuesday night.

On Wednesday morning, the air quality index surged to 157 in Manhattan, well above the threshold of 100 where health is considered to be threatened. Vulnerable people include pregnant women and the elderly, although even healthy people outside these groups can experience breathing difficulty, throat irritation and runny eyes when exposed to air this bad.
The smoke is set to shift away from New York in the coming days but further widespread wildfires are expected in the coming months, with people in the US west hit worst by the smoke as well as the direct threat of the flames.
The wildfire smoke that blankets North America is devastating, to some lethal, but it hardly compares to the smoke being blown up our backsides by a rogues gallery of political leaders who, for decades, have ignored the warnings and continue to promote fossil energy and pipelines. They only put us in such peril because they know 1) the other guy is as bad or worse and 2) their party faithful won't punish them for it at the polls.
These are the Petro Pimps of Parliament Hill and, chances are, you're going to vote for them.