Covid, the Dress Rehearsal for a Future of Chaos? 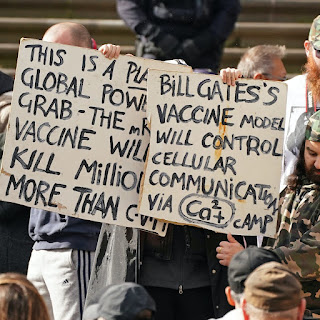 We were shocked by the first wave.  No vaccines. We were left to a regimen of self-isolation, masks, social distancing, lockdowns and endless bouts of handwashing.

The first wave bled into a second wave and then, as vaccines became widely available, a third wave. Most of us had the common sense to get vaccinated when that became possible. Most, not all.

A significant minority said no. They wouldn't have it. Like patients in an asylum there were seemingly endless reasons given. It was a plot. The vaccines carried a chip to spy on you, control your mind or something truly dire. No one knows what's in the vaccine. The risk is way too great.

This same minority flouted the law and pressured governments to lift the restrictions and re-open their economies, something that strikes a powerful chord in today's political caste.

Now as we're halfway through the second year of this pandemic, social cohesion is fracturing. Around the globe this coronavirus is testing

Rock-throwing crowds angry over government mishandling of a spike in COVID-19 cases triggered the dismissal of Tunisia's parliament this week, in what opponents call a "coup" by the country's president.

Amid clouds of tear gas, demonstrators clashed with police in Paris on Saturday over proposed laws forcing all health-care workers to be inoculated, while thousands of "freedom" protesters filled the streets of Australia over a renewed lockdown.

From South Africa to Cuba, Haiti to Lebanon, we are seeing some of the biggest riots, protests and challenges to governments in decades. And many seem to be sparked by the economic and social impacts of the coronavirus and government attempts to contain it.
Dr. Prabhat Jha, director of the Centre for Global Health Research in Toronto, calls it a "perfect storm" of grievances ignited by the catastrophe of COVID.

"If you've got unemployment, inequality and a failure of government to make sure that everyone is covered, and then more broadly, a failure of global government to make sure that every country has a vaccine and every citizen has a vaccine, then all those fault lines really portend years of social unrest," said Jha, who has done emergency pandemic work in Sierra Leone and run projects in India.
Year Two has seen a considerable uptick in political violence and a similar increase in state repression by regimes that exploit the chaos as a means to stifle opposition and consolidate authoritarian rule.
Closer to home:
In the United States, the group ACLED tracked increases and decreases in the frequency of protests, including the sweeping Black Lives Matter movement. Remarkably, the numbers "mimicked" spikes and valleys in U.S. infection rates throughout 2020.

By November, the group says 40 per cent of all demonstrations were related to the pandemic.

"There was a real strong sense of COVID denialism present in [those] protests, a sense that COVID was a product of nefarious international forces — Bill Gates, George Soros and others," Mamphilly said.
Frank Snowden, professor emeritus, faculty of medicine, Yale:
Snowden, who is also the author of Epidemics and Society: From the Black Death to the Present, said that while the COVID-19 pandemic has epidemiological similarities to the Spanish flu, "you didn't really see the kind of social unrest that we're experiencing today." c

He worries that if it continues, "this may be a first wave of the unravelling of societies in parts of the developing world."

Just the beginning, he fears, of something we have not seen before.