Beyond Growth, Get Used to the Idea. 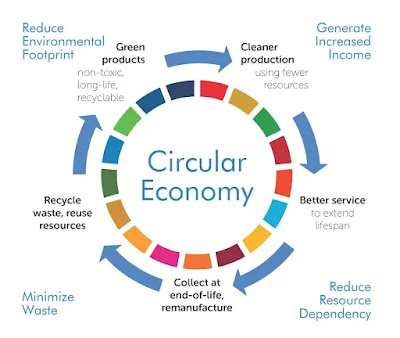 "Only a Fool Keeps Chasing an Impossibility"

It has been slow in coming but it seems the world is finally coming to realize that our belief in growth is a dangerous illusion.

Global growth keeps slowing down. Headline after headline tells us that GDP is losing momentum from China to the U.S. and Europe. The articles detail reasons for the slowdown, as if it's something odd that begs explanation.

Amidst global slowdown and risks of depressed future growth potential from climate change, social unrest, and geopolitical instability, to name a few, responsible leaders face the possibility that growth will be limited in the future. And only a fool keeps chasing an impossibility.
We should adopt an attitude of indifference to growth: agrowth. Under an agrowth strategy, a decline or increase in GDP/profits are both acceptable outcomes. Growth, and certainly progress, might still happen, but it’s no longer the goal. Studies suggests that this might work better than one would at first expect. A prime example is Elon Musk releasing Tesla’s patents in 2014. Musk stated:

“Tesla Motors was created to accelerate the advent of sustainable transport. If we clear a path to the creation of compelling electric vehicles, but then lay intellectual property landmines behind us to inhibit others, we are acting in a manner contrary to that goal.”

Tesla’s stock price has about tripled since then and is at its highest point since the company’s inception. Not that an agrowth-minded person would dwell on that.
Those who dare explore the concept of agrowth will quickly come to some deep existential questions. What motivates people? Are jobs the only way to redistribute wealth? Should our economic goal reflect our life goal(s) and if so, what is my purpose?

Once we start to open our minds to what new goal we can set for our economy, options become limitless.
While the end of growth hasn't caught our leaders' imagination, it has been foreseen, albeit tentatively, for several years. In 2018, the Washington Post reported a general slowing of growth worldwide.
The souring economic outlook can be seen on the bottom lines of multinationals such as FedEx. The global package-delivery company saw its share price sink last week as investors were spooked by executives’ downbeat forecast.

“Internationally, economic strength seen earlier this year has given way to a slowdown,” Rajesh Subramaniam, a FedEx executive vice president, said on a conference call for analysts. “The peak for global economic growth now appears to be behind us.”
The neoliberal model of perpetual growth worked quite well until the 1970s when "GDP growth became detached from material improvements for workers".
Kate Raworth an ecological economist at Oxford says our obsession with perpetual growth has become pathological.
“There's something addictive about that — pathological — that we believe that a country must keep growing forever, no matter how rich it already is. And I believe it's because we are financially, politically and socially ... structurally addicted to endless growth. You just mentioned the financial system. At the heart of our financial system is the drive to maximize the return on investment. And that means that all publicly-traded companies, I speak to chief financial officers and many say, 'We want to be more sustainable. We want to be more ethical.' But every quarter we have to show that we have growing sales, growing profits and growing market share. Otherwise, the markets punish us. They are structurally caught in the pursuit of endless growth.

"Politicians know ... they have to deliver on this outdated idea that GDP going up is the predominant sign of well-being. And socially, I think we've inherited, again, ever since the 1930s and ‘40s and ‘50s, the idea that our children must earn more income than us. And that that's what means they'll have a better life. I don't see children marching in the streets today demanding higher incomes than their parents. I see children marching in the streets for a stable climate. They have switched metrics. And our politics and our politicians and our businesses need to catch up.”
Looking Behind the Curtain.
"I want to shift away from thinking about this growth going up or stagnant or down, because I think it's last century's number and we need to be looking at something different. So let's look at the dynamics of what our economies are producing. And I think Western, high-income economies like yours, like mine, are degenerative. We are running down the living planet in the way we produce things. We take resources, use them for a while, maybe just once, and then throw them away. So we are literally draining our earth’s resources and spewing our waste into her sinks and pushing ourselves over planetary boundaries, causing climate breakdown and ecological crises. So these are the dramas of the times that we should create metrics for.

"We also have deeply divisive economies. America's just actually had a fantastic decade in terms of GDP, and yet 2 in 5 Americans say they'd struggle to come up with $400 in an emergency. 1 in 3 households are classified as financially fragile. What is going on with the 1% running away into the stratosphere? So, we need to turn degenerative economies that run down the planet into regenerative ones that work within the cycles of the living world, that are circular economies that actually restore planetary processes. And we need to turn divisive economies into distributive ones. So that the median wage rises. So that ordinary people doing precarious jobs actually find that earning more and they feel more secure. So to me, these are the dynamics: I want to see more regenerative economies, far more distributive economies. And then when the GDP goes up or down in that process, to me, it's a sort of knock-on effect. And that's why we have to take GDP off the pedestal.”
Only a Fool Keeps Chasing an Impossibility.
Whether our country spends the next four years ruled by Justin or Erin or, deep breath, Jagmeet our next prime minister will be the fool who keeps chasing an impossibility. All they will do is more deeply entrench Canada's "degenerative economy." Why would you expect anything better of fools?