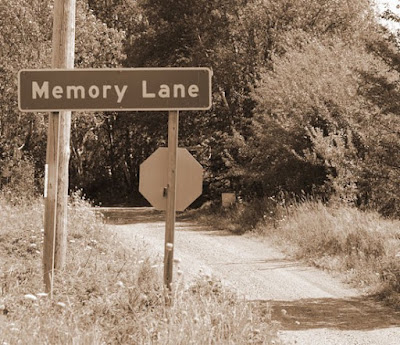 Two natural forces in conflict - nostalgia and creeping normalcy. The first attempts to keep alive fond memories from decades past. The other tries to focus on the present, often obscuring the past.

As the northern hemisphere returns to summer we see this conflict between old reality and new play out, perhaps as never before.

An article in The Guardian, "Beware summer!" looks at the conflict from a British perspective.

In the mid-latitudes of the northern hemisphere, where most of the human population lives, the months of June, July and August have until recently been seen a season of joy, relaxation and celebration. It is when people take their longest holiday of the year, when most weddings are arranged, when Olympics and World Cups are staged. Newspapers have long filled their midsummer front pages with seasonal images of children slurping ice-creams, holidaymakers at the beach and women in bikinis. There are fewer cases of depression linked to seasonally adjusted disorder. Radio DJs fill the airwaves with upbeat seasonal staples such as Summer Breeze, Sunny Afternoon and Walking on Sunshine.

But a jarring note has been struck in recent weeks by a wave of violent extreme weather that has smashed heat and rain records, killed hundreds and raised fears that summer may never seem the same again. Suddenly the full fury of the climate crisis appears almost everywhere at once.

Three weeks ago, it was the deadly heatwave in the north-west Americas that smashed Canada’s all-time temperature record by more than 5C and took at least 500 lives in British Columbia, and the US states of Oregon and Washington. Last week, it was the devastating deluges that turned streets into rivers and trapped people in cellars in Germany, Poland, the Netherlands, the Czech Republic and UK. In the past few days, it has been horrifying images of Chinese commuters starting to suffocate in Zhengzhou subway trains as flood waters pushed air out of the carriages. At least 33 people died in the city after a year’s worth of rain in four days.

Other heat records have been set in Turkey, Finland, Estonia and elsewhere, while savage forest fires in Siberia and North America continue to rage, filling the skies with toxic smoke and sending carbon plumes up into the atmosphere.
Richard Betts, the head of climate impacts research at the Met Office Hadley Centre, said people in the UK may start to emulate Australians who describe hot, sunny weather as “awful” rather than “lovely”.

The seasons have already moved an alarming distance in the northern midlatitudes. A recent study found the duration of summer increased from 78 days to 95 days between 1952–2011. Without a rapid emissions phase out, this part of the world is on course have a six-month summer and only a two-month winter by the end of the century. Our seasonal temperature refuge is shrinking. In fairytale terms, an anti-Narnia trend is wiping out the Goldilocks zone.
The mental health effects of more extreme weather and relentless summers remain underreported. David Eisenman, a professor of community health sciences in California, has studied the likely impact of prolonged fire seasons on people who are be trapped indoors by smoke. “Weeks at a time, most people are resilient, but if it happens for a few months every summer, that’s a different story. And months of smoke are the new thing that we’re going to see,” he said. “Even assuming people are physically safe, fundamentally, it’s about social isolation. The joys that summer once brought become more difficult to access. It’s the experience of social isolation we felt from Covid-19 all over again.”

Reassurance could come in the form of upgraded infrastructure. This will have to be stronger and cooler. As well as higher flood defences, hospitals and care homes will need more air conditioning; cities will need more parks, rivers and shade; roads will have to be designed not to melt and crack in the heat. Betts said buildings and public spaces should not be designed on the basis of past weather data because that is no longer a guide. “As weather more frequently goes outside past experience, it is going beyond what the infrastructure can cope with – so it’s more of a threshold in the human system than the climate system. We urgently need to catch up on adaptation, we are lagging well behind the changes in climate that are now occurring.”
Nostalgia reminds me of the awesome, carefree summers we enjoyed in the 60s and 70s. Young people might spend an entire summer on getting the perfect tan.  It was a time of motorcycles and boats and swimming pools, water skiing and fishing on the lake. What we feared most was that summer would end much too soon.
Today the sun is stronger. In some circumstances an hour in the sun with no protection and you can be microwaved. Now we shield ourselves with broad-brimmed hats and long sleeves. Even a couple of years ago I would have scoffed at the idea of needing an air purifier (or two) to clean the air indoors of wildfire smoke. Pacific Ocean breezes used to do that. Then, just a few weeks ago, we fell under a heatwave bubble that sent temperatures here, barely a hundred yards from the Salish Sea, into the upper 30s.
It's encouraging to know that there are options available to us to protect essential services, to keep our cities liveable, to offset some of the frailty of the human body.  As the article notes, the climate emergency proceeds apace and yet we keep falling ever further behind.
Update:
While our engineers toil slavishly to meet the Pharaoh's insatiable appetite for pipelines, the authorities in Athens have established a new department for a chief heat officer.  The CHO's job will be to find ways to protect residents and tourists alike from dangerous heatwaves and to identify adaptation strategies.
The appointment, made on Friday by the mayor of Athens, Kostas Bakoyannis, is the first in Europe and believed to be only the second in the world, after Miami-Dade county in Florida appointed a chief heat officer earlier this year.

Bakoyannis said: “Climate change for our city means more frequent and dangerous extreme high temperatures for residents and for tourists who are critical for our economy. Unfortunately, Athens is not unique – heat is an emergency for cities across Europe and the world.”
Anne Hidalgo, the mayor of Paris, warned that cities everywhere must take note. “Extreme heat is becoming the new normal in urban environments and occurs with a dramatic frequency. Devastating heatwaves remove any doubt that climate change affects all our lives. There is an urgent need to strengthen the actions taken in cities to address extreme heat and prevent the silent killer from causing more deaths.”