Yeah, They're There. No, We Don't Know What They Are. 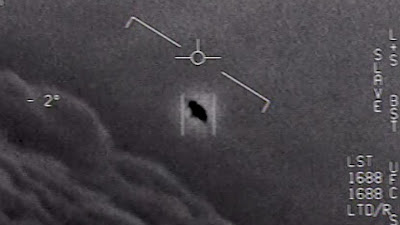 That sums up the blockbuster report on "unidentified aerial phenomenon" that have been seen, tracked and recorded zipping through US airspace.

The US government has said it has no explanation for dozens of unidentified flying objects seen by military pilots.

A Pentagon report released on Friday says of 144 reports made about the phenomena since 2004, all but one remain unexplained.

It does not rule out the possibility that the objects are extra-terrestrial.

Congress demanded the report after the US military reported numerous instance of objects seen moving erratically in the sky.

The Pentagon then established the Unidentified Aerial Phenomena Task Force last August to look into the reports.
Here's your problem. If you acknowledge these phenomena are zipping through your sensitive military airspace but you don't know what they are and you have shown that you can't keep up with them much less control them, then you don't have secure control of your airspace and, if you don't have air dominance then who does?
UAP "probably lack a single explanation", the report said. Some could be technologies from another nation like China or Russia, others could be natural atmospheric phenomena like ice crystals that could register on radar systems, while the report also suggested some could be "attributable to developments and classified programs by US entities".
The idea that perhaps China or Russia have technology that allows them to penetrate US military airspace - that's a bit unsettling. The report mentions that these UAPs may present a threat to American national security.
Oh dear.