Tipping Points - Closer Than We Imagine? 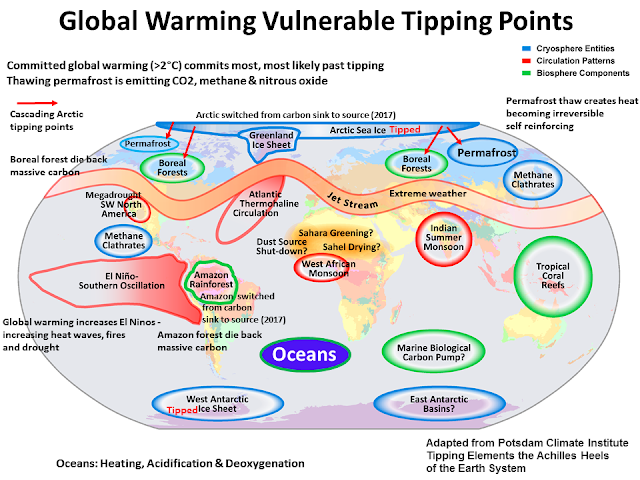 You don't hear much talk anymore about positive feedback loops, tipping points or runaway global warming. Those things don't fit into the current narrative of our governments, especially the major emitters such as petrostate Canada.

15 years ago the pitch was that we had to hold anthropogenic global warming to 2 degrees Celsius. If we didn't we risked awakening the sleeping giant, nature. Once certain thresholds were crossed, "tipping points" we called them, then nature would start generating its own greenhouse gas emissions that might eclipse the man-made stuff.

The term ‘‘tipping point’’ commonly refers to a critical threshold at which a tiny perturbation can qualitatively alter the state or development of a system (T. Lenton). This generally includes an abrupt irreversible climate system switch and an acceleration of change beyond the driving forcing (NAP 2011).

Tipping points have disappeared from our government's narrative. Why? Because they're such a downer?

The Intergovernmental Panel on Climate Change, IPCC, has breathed new life into the tipping point problem. It is issuing a red alert that the climate emergency is approaching the point of no return.

The impacts are likely to be much closer than most people realise, a a draft report from the world’s leading climate scientists suggests, and will fundamentally reshape life in the coming decades even if greenhouse gas emissions are brought under some control.

The Intergovernmental Panel on Climate Change is preparing a landmark report to be published in stages this summer and next year. Most of the report will not be published in time for consideration by policymakers at Cop26, the UN climate talks taking place in November in Glasgow.

A draft of the IPCC report apparently from early this year was leaked to Agence France-Presse, which reported on its findings on Thursday. The draft warns of a series of thresholds beyond which recovery from climate breakdown may become impossible. It warns: “Life on Earth can recover from a drastic climate shift by evolving into new species and creating new ecosystems … humans cannot.”
When a Siberian town far inside the Arctic Circle hits 47.8 degrees Celsius, that's a tipping point. Tundra dries out and catches fire, releasing its rich store of greenhouse gases.  The permafrost beneath, itself a source of sequestered carbon from the age of dinosaurs, melts, releasing far more greenhouse gases. How do we stop it? We can't.
The warning is blunt. Even if we somehow get man-made emissions under control, the climate emergency will "fundamentally reshape life in the coming decades."  Your life, our lives, are going to be fundamentally reshaped.
The chart above is from the Potsdam Institute, Germany's climate change think tank.  It shows that tipping points are similar to billiard balls. At the break there's a cascade as the cue ball transmits energy to another, on and on and on.
At the Paris climate summit in 2015, when world leaders set a new target of arresting man-made warming to 1.5 degrees Celsius, then Potsdam director, Hans Joachim Schellnhuber, warned our only hope of staying within that target required the "induced implosion" of the fossil energy giants.  In other words, governments had to shut them down. Instead Canada is building pipelines to flood world markets with the highest carbon, lowest value ersatz petroleum on the planet.