Something Amazing and Frightening Could Be Unfolding Before Our Eyes 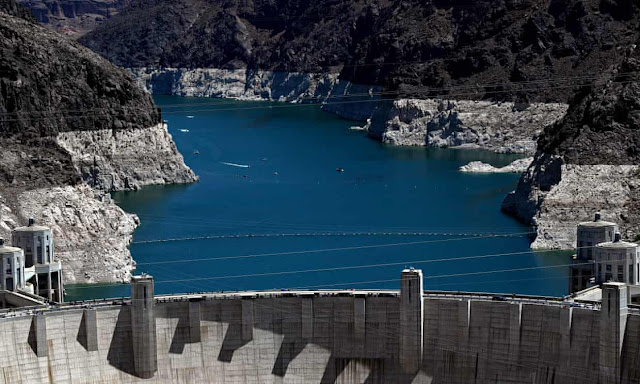 Over the past two decades the American southwest has been hit by droughts. That hasn't stopped the region from growing with the arrival of newcomers, especially retirees from the northern states. The droughts - well, they come and they go. Until now.

Researchers know that this region, the southwest and the prairie, have a history of megadroughts of a duration between 60 and 80 years at a stretch. And scientists are now warning that the region may be in the opening stages of megadrought right now.

John Wesley Powell, the one-armed US army civil war veteran who led the first white expedition down the Colorado River through the Grand Canyon – a daring boat run in 1869 – later became an ethnographer who wrote a prescient 1878 government paper titled: Report on the Lands of the Arid Regions of the United States. In it, he unflinchingly described the scarcity of water, and summarized that much of the American south-west, if it must be settled, should be settled lightly and modestly. Overpopulate it, and it will be unforgiving.

Wallace Stegner, the dean of western writers, observed, “As a government scientist, Major Powell was now defying ignorance. He was taking on vested interests and the vested prejudices by which they maintained themselves.”

(aside - I love that phrase, "the vested prejudices by which they maintained themselves." Doesn't that fit today's fossil fuel giants and their political minions?)

Instead of heeding Powell's warnings the US government chose to build two mega-dams on the Colorado River, the Hoover and Glen Canyon dams.

Today, the Colorado River provides water for 40 million people in seven states, but stricken by a devastating drought, it’s not what it used to be. Lake Mead and Lake Powell are both at about 30% capacity, down more than 140 feet from “full pool”. If the lakes go much lower, the dams will be unable to generate power. The snow pack in the Rocky Mountains – that feeds the 25 tributaries of the once mighty Colorado – is low yet again. And climate models say the entire region is going to get hotter and drier. More arid, less livable. The lakes reside in picturesque red rock country, but now sit surrounded by what looks like bleached bathtub rings as they evaporate in triple-digit summertime temperatures.
The photograph shows the Hoover Dam last week. The wakes from speed boats on Lake Mead offer perspective revealing how far the lake water levels have receded.
Some 700 years ago the Anasazi people disappeared from the Colorado Plateau. In his book, Collapse, the geographer Jared Diamond says multiple factors were involved, “but they all go back to the fundamental problem that the US Southwest is a fragile and marginal environment for agriculture – as is also much of the world today”. Civilizations blunder into self-destruction because they ignore the signals all around them, and refuse to change. The subtitle of Diamond’s book says it all: “How Societies Choose to Fail or Succeed.”
...If the biodiversity is dying, if the humpback chub, south-western willow flycatcher and desert tortoise are threatened or endangered, and if nothing changes, then they, like the Anasazi, will disappear. And modern cities will be next. Imagine Phoenix at 130F. It’s coming.
I first encountered these 'ring around the lake' conditions while motorcycling through the US south west 15 years ago. I had seen photos but it's still a shock to run into it yourself. No one seemed to care much. Marinas just moved their docks to deeper water. Boats still carved up the lakes with their wakes. The modern attitude - 'they'll think of something' - prevailed.
What about this megadrought business? Could it happen to us in Canada? It didn't take much reading to learn that megadrought was thought to be a normal condition in the prairie. It's one of the reasons the land is in scrub vegetation, sagebrush and trees, where they can be found, are stunted little things.  When European settlers arrived looking for land to farm they liked what they saw.
What no one understood was that the prairie was in the midst of an inordinately wet period. What attracted them to this land was abnormal precipitation.
What will the Americans do if they cannot restore the Colorado River watershed? What if they can't bring back the levels of Lake Mead and Lake Powell? What if the Hoover and Glen Canyon dams can't generate electricity?  What about the golf courses and artificial lakes and swimming pools of Las Vegas?
Today's Washington Post reports on a "heat dome" that has formed above the southwest states, trapping the heated air overhead and creating record temperatures in the cities of the region. 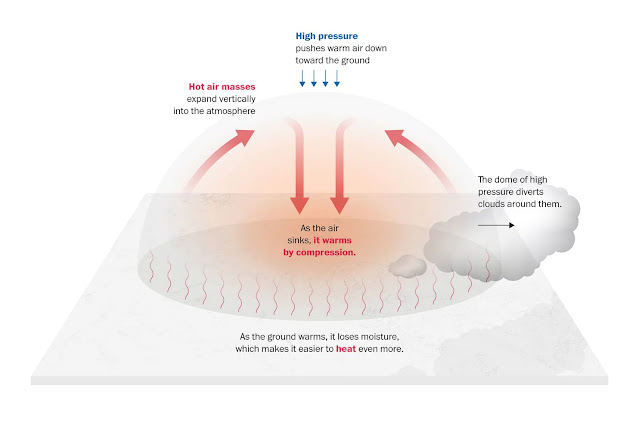 As a high-pressure system becomes firmly established, subsiding air beneath it heats the atmosphere and dissipates cloud cover. The high summer sun angle combined with those cloudless skies then in turn further heat the surface.

But the vicious feedback loop doesn’t end there: the combination of heat and drought is working to send this heat wave into truly extreme territory. With very little moisture in soils right now, heat energy that would normally be used on evaporation — a cooling process — is instead directly heating the air and ground surface.

Jane Wilson Baldwin, a postdoctoral researcher at the Lamont-Doherty Earth Observatory at Columbia University, said that given the severe drought in the West right now, many feedbacks between the land and the atmosphere are combining to produce an unusually persistent extreme.

“When the land surface is drier, it can’t cool itself through evaporation which makes the surface even hotter, which strengthens the blocking high further,” she said in an interview.

The situation is greatly amplified by increasing background temperatures due to the burning fossil fuels.

“You would be hard-pressed to come up with a metric of heat waves that isn’t getting worse under global warming,” she said, adding that the increasing intensity and duration of heat waves is particularly clear.

Heat waves are often high mortality disasters, but those deaths are preventable, she said, with advance warning, air conditioning, cooling centers, and neighbors checking on neighbors.

However, avoiding heat-related disasters also depends on the resilience of the electrical grid, which can fail if electricity demand due to air conditioning use exceeds supply. As a result, there is the double risk of infrastructure failure and health impacts from temperature extremes, as occurred during the Texas Freeze of February.
California is just beginning its "dry season." According to CNN, by this time last year, the state had a record 1,065 acres consumed by wildfires. Already this year that's up to 13,605 acres, a seven-fold increase over last year's record.
It's hard to watch this unfold before our eyes but it's inescapable. You can put your head in the sand but not for very long.