Our "New Normal" - The Guardian's Ode to Lytton 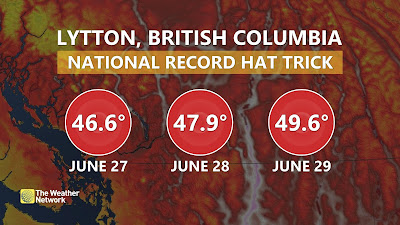 After the last three days I've about had it with the Petro-Pimps of Parliament Hill starting with our prime-ministerial pipeline pusher, Justin Trudeau. It's hard to put what we went through into perspective. Fortunately The Guardian has taken care of that:

Lytton is at 50 deg N latitude – about the same as London. This part of the world should never get this hot. Seattle’s new all-time record of 108F, also set Monday, is hotter than it’s ever been in Miami. In Portland, the new record of 116F would beat the warmest day ever recorded in Houston by nearly 10 degrees.

This heat wave was a perfect storm long in the making. After centuries of fossil fuel burning and decades of warnings from scientists, it’s time to say it: we are in a climate emergency.

Climate change is not just warming the surface of the planet, it’s warming Earth’s entire troposphere – the lowest layer of the atmosphere where all our weather occurs. That’s particularly true in mountainous areas, where temperatures are rising even faster than elsewhere. When snow and ice recedes or even disappears from mountains, the bare soil beneath can warm unimpeded. A 2015 study found that mountainous areas above 2,000 meters (6,500ft) are warming about 75% faster than places at lower elevations.
...Downstream of Lytton, flood warnings are now in effect for the river valleys as sudden snow and ice melt has created a torrent of rushing water. For the time being, Canada’s glaciers are melting so fast they’re flooding out homes under clear skies.

These are the kinds of events that should open our eyes and recognize that climate change is not a science issue, it’s a human rights issue.

...The most shocking part is that all this is happening with just two degrees Fahrenheit of global warming in the 150 years since we started burning fossil fuels on a large scale. On our current path, we’re heading for another three to five degrees of warming in half that time.

At this point, building a world that can thrive will require “rapid, far-reaching and unprecedented changes in all aspects of society” according to the Intergovernmental Panel on Climate Change, the world’s leading body of climate scientists. Climate change isn’t just a thing that’s happening, it’s a series of choices made by actual people who are sharing this planet with us.
This Liberal government has filled our ears with greenwash as it has tried to have it both ways. Leaving Canadians to die while propping up a massive stranded asset, bitumen, is monstrous and an affront to our human rights.
We'll not sort this out at the ballot box. O'Toole on one hand. Trudeau on the other. The lesser of two weasels. If we are to survive we'll have to find some way of getting out from under these two.