"Failed" - It Sounds Better than "Defeated" 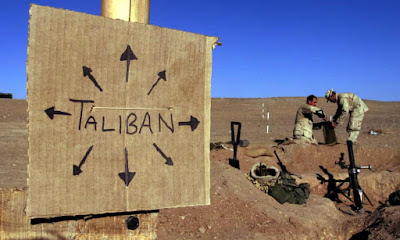 Former Afghan warlord turned president turned pundit in exile, Hamid Karzai, complains that the US and her allies "failed" Afghanistan and are leaving the country "in total disgrace."  At least he didn't say that the ISAF forces were "defeated." Failure can be spread around. Defeat is something the military wears - Algeria, Viet Nam, that sort of thing.

We were defeated. As in Viet Nam, we won all the battles but lost the war. The West went into Afghanistan with clear objectives - to send the Taliban packing for good, to destroy al Qaeda, and to restore civil society to the country, democracy, civil and human rights - that sort of thing.  The Taliban rallied, just enough to deny us our objectives. In other words, we lost. We were defeated.

20 years. The last American  army boot is supposed to leave Afghan soil on the 20th anniversary of the 9/11 attacks that sparked this madness.

20 years is a pretty long campaign, certainly by modern standards. Despite what some generals say, if you can't win in 20 years, you just can't win. There's a phrase that captures this David v. Goliath struggle. "We have all the watches but they have all the time." For us to win, we must use all our sophisticated firepower and military prowess to destroy them as an effective entity. For them to win, they merely have to survive as an entity, denying us combat whenever possible but keeping our forces in the field while the years roll on and the folks at home grow weary or bored.

"We will be better off without their military presence," he said. "I think we should defend our own country and look after our own lives. ... Their presence (has given us) what we have now. ... We don't want to continue with this misery and indignity that we are facing. It is better for Afghanistan that they leave."

Karzai's rule followed the overthrow of the Taliban in 2001 by a U.S.-led coalition that launched its invasion to hunt down and destroy the al-Qaida network and its leader, Osama bin Laden, blamed for the 9/11 attacks on America.
You tell 'em Hamid. Tell them about an Afghanistan that was never freed of the clutches of warlords, either Taliban or Northern Alliance.   Tell them about a country that went from oppressive and cruel to deeply corrupt from head to toe.  Tell them about a country that, in 20 years, has failed to raise an army capable of defending their nation against the Taliban.
Shortly after Western forces stormed into Afghanistan, a Senate foreign relations committee staffer testified that there had never been a country such as this that had achieved democracy without first abandoning the dual scourge of tribalism and warlordism. His warning was not heeded.
The sad part, for Canada at least, is that there's no appetite for an honest discussion of our years in Afghanistan, what we did right and what we did wrong, how we were drawn into this fiasco and how we chose to expand our war for no good end.