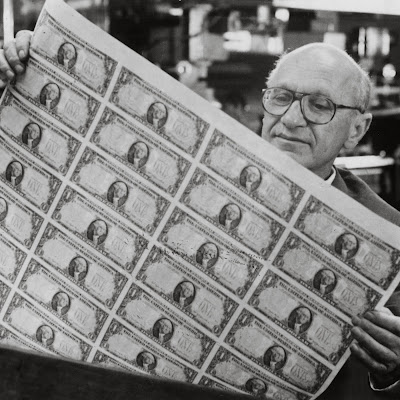 American economist, Milt Friedman, captured the somewhat limited imaginations of Margaret Thatcher, Ronald Reagan and our own Brian Mulroney and they, in turn, ushered in the era of free market globalism - the neoliberal order.

Friedman was convinced that free markets were the solution to just about everything. Think tank scholar and author, Zach Carter, explores the mind of the man who caused so much folly, beginning with Friedman's writings on his 1976 speaking tour of South Africa. Carter writes that a contemporary reading of Friedman's Cape Town lectures is a harrowing experience:

His first speech was an unremitting diatribe against political democracy—an explicit rejection of, in Friedman’s words, “one person, one vote,” delivered to a nation in which more than half of the population was disenfranchised by race. Voting, Friedman declared, was inescapably corrupt, a distorted “market” in which “special interests” inevitably dictated the course of public life. Most voters were “ill-informed.” Voting was a “highly weighted” process that created the illusion of social cooperation that whitewashed a reality of “coercion and force.” True democracy, Friedman insisted, was to be found not through the franchise, but the free market, where consumers could express their preferences with their unencumbered wallets. South Africa, he warned, should avoid the example of the United States, which since 1929 had allowed political democracy to steadily encroach on the domain of the “economic market,” resulting in “a drastic restriction in economic, personal, and political freedom.”
...What remains remarkable is the extent to which the Democratic Party—Friedman’s lifelong political adversary—came to embrace core tenets of Friedmanism. When Friedman passed away in 2006, Larry Summers, who had advised Bill Clinton and would soon do the same for Barack Obama, acknowledged the success of Friedman’s attack on the very legitimacy of public power within his own party. “Any honest Democrat will admit that we are now all Friedmanites,” he declared in The New York Times.

No longer. In the early months of his presidency, Joe Biden has pursued policy ambitions unseen from American leaders since the 1960s. If implemented, the agenda he described in an April 28 address to Congress would transform the country—slashing poverty, assuaging inequality, reviving the infrastructure that supports daily economic life, and relieving the financial strains that childcare and medical care put on families everywhere. It will cost a lot of money, and so far at least, Biden isn’t letting the price tag intimidate him. “I want to change the paradigm,” he repeated three times at a press conference in March.
But the real turn is not about deficits or spending levels. It is the relationship between economic policy and democracy itself. For Friedman, liberty lived in the marketplace, rendering government a necessary evil under the best of circumstances. Today’s Democrats, by contrast, have reclaimed state power as an essential component of self-government. When he laid out his agenda in April, Biden declared “it’s time to remember that ‘We the People’ are the government—you and I. Not some force in a distant capital. Not some powerful force that we have no control over. It’s us.”
A Noble and Potentially Quixotic Quest
I just dusted off my copy of John Ralston Saul's 2005 book, "The Collapse of Globalism."  Saul wrote of the failure and death of the neoliberal era. He explained that economic models come and go with an amazing regularity. Each has a roughly 30-year shelf life. Neoliberal globalism's time had come. It was over. We were now in an interregnum, just waiting for the next big thing to arrive. 16 years later we're still waiting.
Eventually even neoliberalism's most ardent champion, the International Monetary Fund, had a change of heart.

The critics were right. Neoliberalism doesn't work. Got it. We've even got it from the brothel of neoliberal thought, the International Monetary Fund that has spent decades administering toxic neoliberal tonics to poor nations, especially Third World nations, around the world often finishing off the job begun by the developed nations. Even the IMF now says that neoliberal policy was "oversold" and, instead of helping, fuels inequality and economic chaos.

Here's how Fortune Magazine describes the IMF and neoliberalism:

Asking if the International Monetary Fund supports economic neoliberalism is like asking if the Pope is Catholic — the answer is so obvious it seems silly to even raise the question. The IMF has been one of the principle endorsers of neoliberalism—an ideology that promotes free markets, free trade, and small government—for decades.

So, what are we to make of this IMF mea culpa? I hope, very little. Take it for what it is, an admission. An admission that they've been driving us down a dead end road. Then go back to what the learned economists and social historians have been telling us for so long. Start with Nobel laureate economist, Joe Stiglitz, whose grounding in the subject of inequality goes back to his PhD thesis. Read Phil Mirowski and James Galbraith. Read John Ralston Saul's dissection of globalism.
In more recent years others, such as economist Nouriel Roubini, have been proclaiming that neoliberal capitalism is in a death spiral. Then came Thomas Piketty's "Capital in the Twenty-First Century." "The book's central thesis is that when the rate of return on capital (r) is greater than the rate of economic growth (g) over the long term, the result is concentration of wealth, and this unequal distribution of wealth causes social and economic instability."

The social and economic instability inflicted by neoliberal inequality was documented by two British epidemiologists, Wilkinson and Pickett, in their book "The Spirit Level." The lesson is that rampant inequality of the type spawned by neoliberalism creates widespread and deep-seated social dysfunction from which everyone, rich and poor alike, suffers.

The neoliberal era, ushered in by Thatcher, Reagan and Mulroney, was utter madness from the start. Like any new ideology, this entirely faith-based model, took years to implement, especially its economic spearhead, globalism. Like most religions (except for your own of course) it was based on a garbled web of half-truths and outright lies which is why it needed such high-level political muscle to take hold.
Carter continues:
The Friedman doctrine is an embarrassment borne of overconfidence. If profit maximization is really the sole responsibility of each business, then why are there so many different kinds of business? Why settle for the meager profits of, say, automobile manufacturing when the blockbuster returns of high-leveraged financial speculation are available? And if profit is proof of true social value, then on what grounds could a society ever outlaw anything a profitable business does?
The Dems Take the Bait


It was a Democrat, Jimmy Carter, who had nominated Volcker to the Fed to pursue Friedman’s monetarism. Ted Kennedy’s failed primary challenge to Carter was the last gasp of the old-line New Deal, Great Society–oriented Democratic Party (and even Kennedy backed deregulation of the airlines and trucking industry). When Jesse Jackson attempted to revive the old vision in 1984, the rank and file were no longer interested, and Jackson was able to secure only 18 percent of the popular vote. Without political patrons in Washington, the once-dominant Keynesian economists were reduced to oddball status in academia, writing for obscure left-wing journals or overhauling their intellectual framework to embrace core tenets of Friedmanism while attempting to make room for the occasional embarrassing budget deficit.
...Friedman never warmed to the Democratic Party, but when Bill Clinton declared “the era of big government is over,” pursuing a policy of balanced budgets, free trade, and financial deregulation, he was, with a few exceptions, attempting to out-Friedman the Republicans.

...Friedman may have devoted his life to the American right, but the political magic of his persona was always on the left. His insistence that market mechanisms could be used to promote essentially progressive social values was the key to popularizing a worldview that ultimately amounted to little more than the celebration of political rule by the rich.

...Joe Biden is the first president to desecrate not only the tenets of Friedman’s economic ideas, but the anti-democratic implications of his entire philosophy. He is also the first Democratic president since the 1960s who has formulated and publicly endorsed a coherent defense of American government as an expression of democratic energy. It is a powerful vision that enjoys the support of a large majority of American citizens. He has nothing to fear but Friedman himself.
As Ralston Saul points out, economic models are more like religion than sciences. They're faith-based. People (who matter) come to believe in something new to supersede what they once embraced and the ease with which they evolve in succession reveals there's precious little to them that's cast in stone.
How many of us cannot recognize how the world of the 1970s differs from the world of 2021? The magic of monetary supply and free market globalism have done very little to the problem of climate change perhaps, that is, to hasten its advance.   Blind reliance on the guidance of the marketplace has done much to undermine public confidence in their political leadership just as it was weakened the bond between those elected to high office and those who put them there.
If Joe Biden can steer us out of the ditch of neoliberalism, his presidential legacy will eclipse most of his predecessors'.  He'll need to summon every ounce of power and influence of the presidency.