When You're Doug Ford and Kelly McParland Turns On You, You Might Be in Trouble 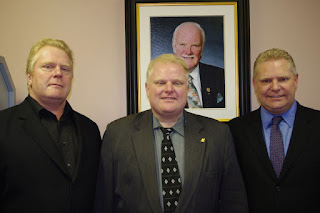 Fatuous. There's a ring to that word at least when Kelly McParland is using it.

For all-time most fatuous remarks by a serving politician, Ontario Premier Doug Ford’s explanation for his senseless decision to retain a ban on healthy outdoor sports takes the cake.

“I talk to my buddies, I know what happens. You know, they pick up another buddy, two or three, they go golfing, and there’s nothing wrong with golfing, the problem is the mobility. Then after the golf they go back, they have a few pops, that’s the problem. That’s the issue.”

So let’s get this straight. A province of almost 15 million people has been banned from participating in healthy outdoor activities, in spite of the overwhelming advice of medical and scientific experts that it’s good for them, because Doug Ford’s buddies can’t control themselves enough to resist “a few pops” after their golf game.
That does seem to sum it up. Even a guy like McParland gets it right every now and then.