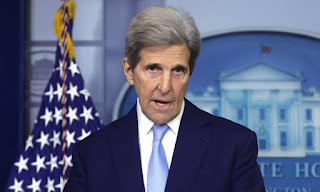 My mother was fond of reminding her sons that the road to Hell was paved with good intentions. Let's not allow the climate crisis become that road to Hell.

Kerry says the US will achieve that goal and, the best part, it will be painless. The secretary says half of the target will be achieved with technologies that haven't been invented yet. Wait a second, John. Less than 10 years, remember?

“You don’t have to give up a quality of life to achieve some of the things that we know we have to achieve. That’s the brilliance of some of the things that we know how to do,” he told BBC One’s Andrew Marr show. “I am told by scientists that 50% of the reductions we have to make to get to net zero are going to come from technologies that we don’t yet have. That’s just a reality.

“And people who are realistic about this understand that’s part of the challenge. So we have to get there sooner rather than later.”
Herculean effort is amazing. Herculean promises, not so much.