The Triumph of Neo-Feudalism 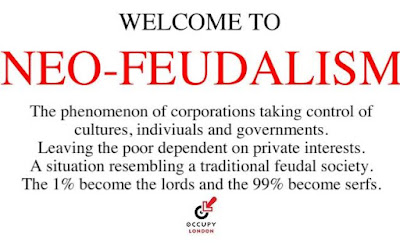 When Reagan, Thatcher and Mulroney ushered in the neoliberal era of globalized free trade we were fed a package of lies. Yes, we would say goodbye to most of our manufacturing jobs but they would be replaced with even better jobs at higher wages and more of 'em. It wasn't about lowering our standards of living. It was about raising the standards of living of impoverished workers in other lands.

It was a lie then. It remains a lie today even as our political caste peddles the same nonsense.

Chris Hedges takes a look at the subjugation of labour in China in "Dying for an iPhone."

Global capitalists have turned back the clock to the early days of the Industrial Revolution. The working class is increasingly bereft of rights, blocked from forming unions, paid starvation wages, subject to wage theft, under constant surveillance, fired for minor infractions, exposed to dangerous carcinogens, forced to work overtime, given punishing quotas and abandoned when they are sick and old. Workers have become, here and abroad, disposable cogs to corporate oligarchs, who wallow in obscene personal wealth that dwarfs the worst excesses of the Robber Barons.

The suffering of the working class, within and outside the United States, is as ignored by our corporatized media as the suffering of the Palestinians. And yet, I would argue, it is one of the most important human rights issues of our era, since once workers are empowered, they can fend off other human rights violations. Unless workers can organize, here and in countries such as China, and achieve basic rights and living wages, it will cement into place a global serfdom that will leave workers trapped in the appalling conditions described by Friedrich Engels in his 1845 book “The Conditions of the Working Class in England” or Émile Zola‘s 1885 masterpiece “Germinal.”
Workers subjected to conditions not much different than that of battery hens. This is the present in China and the future for the rest of us in the not distant future.
The United States cast its workers aside in the 1990s with de-industrialization. China did the same by dismantling socialism in favor of state-controlled capitalism. State and collective sector jobs in China fell from 76 percent in 1995 to 27 percent in 2005. Tens of millions of laid off workers were left to compete for jobs run by corporations such as Foxconn. But even these jobs are now under threat, partly from automation, with workers on assembly lines replaced by robotic automatons that can spray, weld, press, polish, do quality testing and assemble printed circuit boards. Foxconn has installed over 40,000 industrial robots in its factories, along with hundreds of thousands of other automated machines.
All That's Missing in our Brave New World is the Soma.

Those who lead these corporate behemoths often replicate the behavior of despots, not only exerting total control over every aspect of their workers lives but dispensing folksy wisdom to the masses. They are often treated by a fawning media as gurus, asked to opine–as Bill Gates, Warren Buffet, Elon Musk and Jeff Bezos do–on a range of social, economic, political and cultural issues. Their immense fortunes confer to them in our Mammon-worshipping society a sage-like status.

Terry Gou, the founder and CEO of Foxconn, has published a list of slogans and aphorisms that adorn the walls of his factories, along with his portraits. Workers are required to write out passages from “Gou’s Quotations.” While Mao Zedong called for class struggle and rebellion, Gou calls for conformity and blind obedience. “Growth thy name is suffering,” reads one of his quotes. The Wall Street Journal reporter Jason Dean, in a 2007 interview with Gou, characterized Gao as a “warlord,” and noted that “he wears a beaded bracelet he got from a temple dedicated to Genghis Khan, the thirteenth-century Mongolian conqueror whom he calls a personal hero.”
This Isn't About Economics. It's About Social Survival. We Are Living In the World that Marx Foretold.
...We will not save ourselves through the perverted individualism, sold to us by our corporate masters and a compliant mass media, which encourages our advancement at the expense of others. We will save ourselves by working in solidarity with workers inside and outside the United States. This collective power is our only hope. Amazon workers from the Hulu Garment factory in Phnom Penh, Cambodia, and Global Garments factory in Chittagong, Bangladesh, recently led a global day of action to make Amazon pay all its workers, no matter where they live, fair wages. This has to be our model. Otherwise, workers in one country will be pitted against workers in another country. Karl Marx and Friedrich Engels got it right. Workers of the world unite. You have nothing to lose but your chains.