The Other Pandemic - Moral Decay. 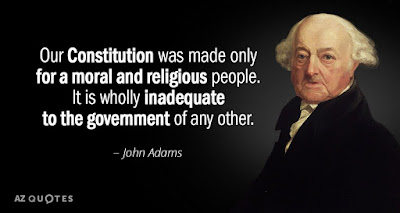 I spotted this on social media the other day:

I'm sure it's a gag, a jest, but is it? Could it be real, another example of how we're losing social cohesion at the very moment we need it most?

Greed is normal. Beggar thy neighbour could have been an apt description of Trump's trade policy. These ideas flourish in a one-dimensional, black and white mind where critical thinking is dismissed as burdensome. It fuels moral decline.

The election was stolen. With the ouster of Liz Cheney, the Big Lie has become the official mantra of the Republican Party. No matter that Trump strolls bare-assed across the stage. They will all swoon over the exquisite cut of his regal garments.

No matter that the Department of Justice, long harnessed into the service of Donald J. Trump, scrutinized the voting and found the election free and fair. No matter that Trump's hand-picked and obsequious attorney general said his Master's claims were bunk. No matter that some 60 law suits to derail the election were dismissed for absolute want of evidence. No matter that state election officials recounted the ballots and found no irregularities.  Those are facts and no mountain of facts can prevail over the insane ramblings of a pathological liar, the sociopath who still holds the reins of power over the GOP.

Congressional Republicans and the GOP hierarchy aren't mad, not most of them anyway. Their failure is one of moral decay. It infects the party on Capitol Hill and in state houses across America. It has become their modus operandi, their stock in trade. They have weaponized it and deployed it to great effect against their very own, Trump's base, the Gullibillies.

Not only are they dishing out horseshit but they're convincing their supporters that it's tasty.  They choose to follow the Grifter-in-Chief's lead.

Lincoln warned that a house divided against itself cannot stand. When half the house stands on a foundation of sandy belief and the other on rock-solid fact, isn't it but a matter of time and circumstance before it falls?

The current scientific consensus is that the current decade, the 2020s, will be very difficult. Less so for the latitudinally blessed in the temperate zones. Hellishly worse for those in tropical/equatorial regions. In a world in which everything, even the climate emergency, is so politicized, this could be nightmarish. In a world in which even the affluent nations are divided into warring camps, tribes, we will be without the agility and resolve to effectively respond. I'm sure the ancient Greeks would have made a lovely tragedy out of this. Those whom the gods would destroy they first make mad.

This regression into tribal camps transfers political power up, from the many to the few. In the Republican Party that is one man, perhaps the worst man to entrust with such power. Yet is a similar process not taking hold elsewhere, even here?

For most of us, Covid-19 has been the most dislocative event of our lifetimes. We've all given up a great deal over the past 15 months. We have made sacrifices, our governments have raided the treasuries, but no one really knows what the aftermath will look like. I've yet found a convincing argument that we're going back to normalcy as we knew it on New Years Eve 2020. Rarer still are suggestions that we will emerge stronger rather than diminished.

Unlike a major war, we're not coming out of this catastrophe, more united or with a renewed moral purpose. Maybe we should start thinking about that.