So Much Worse Than I Had Imagined 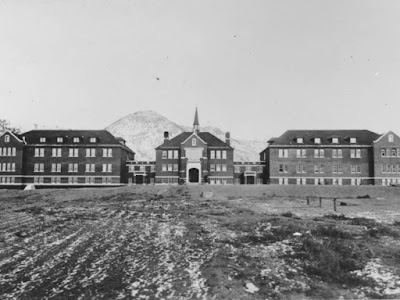 I hope to not hear anyone boasting about our great Canadian values, not for a while, not after the discovery of 215 unmarked children's graves at the Kamloops Indian Residential School.

More than a century worth of Canadian governments, Conservative and Liberal alike, looked the other way as First Nations children were removed from their families, often by force, and interned in the charnel houses known as residential schools. At least 3,200 children, some say closer to 6,000, died in these festering hell holes, most of diseases such as tuberculosis or meningitis. Canada's gulags.

Those who survived rarely emerged unscathed, having been treated brutally, sometimes denied food, without proper medical care, some sexually abused or worse. Some survivors migrated to nearby cities and succumbed to alcohol and drug addictions. There was no treatment for their PTSD.

The Kamloops residential school carried 51 deaths on its ledgers. There was no record of the other 215.

As a child, Chief Harvey McLeod of the Upper Nicola Band attended Kamloops Indian Residential School stud. He told CTV this week that when schoolmates disappeared, they were simply never spoken of again. “I just remember that they were here one day and they were gone the next,” he said.

The Truth and Reconciliation Commission ultimately determined that at least 3,200 children died while a student at a Residential School; one in every 50 students (possibly one in 25) enrolled during the program’s nearly 120-year existence. That’s a death rate comparable to the number of Canadian POWs who died in the custody of Nazi Germany during the Second World War.

...The chair of the Truth and Reconciliation Commission, Justice Murray Sinclair, has said the true number of deaths could be as high as 6,000 . But a true figure will never be known for the simple fact that death records – if they were kept at all – were often lacking even basic personal information. “In many cases, school principals simply reported on the number of children who had died in a school, with few or no supporting details,” reads the final report of the Truth and Reconciliation Commission .

One third of children who died at a residential school did not have their names recorded by school administrators. One quarter were marked as deceased without even their gender being noted. Among the 2,800 names on the official memorial register are children known to recorded history only as “Alice,” “Mckay” or “Elsie.”

Bodies of children were not returned to families, and parents rarely learned the circumstances of a child’s death. Often, the only death notification would be to send the child’s name to the Indian Agent at his or her home community.

In 1938, after one mother near Cornwall, Ont., learned of her son’s death at residential school due to meningitis, she was denied a request to return his body home for burial. “It is not the practice of the Department to send bodies of Indians by rail excepting under very exceptional circumstances,” read a response from the Department of Indian Affairs, adding that it was “an expenditure which the Department does not feel warranted in authorizing.”
There was plenty of righteous indignation at Trump's handling of children crossing the border from Mexico, kids being stripped from their parents, put into compounds. That was a terrible thing to do. But how does that stack up against what a succession of Canadian governments, Liberal and Conservative, did to our own First Nations and their children?