It's Time to Face Up to Reality 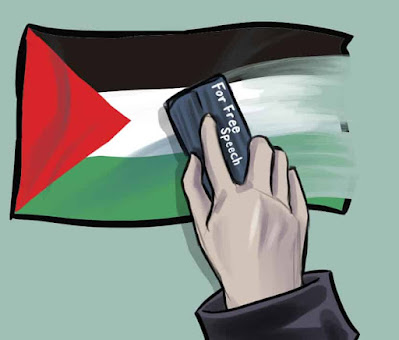 The Palestinian people are captive and, unless they leave their homeland, they will remain captive.

Says who? Well, among others, Gwynne Dyer. He writes that the liberal progressive Israel embraced by so many Canadians and our politicians is no more, hasn't been for a long time. Israel is a nation and a people of the far right and, for them, there's no going back.

Just before the Six-Day War, thanks to massive Jewish immigration from the diaspora, Jewish Israelis outnumbered the Arabs who had not been driven out in the 1948 war by around seven-to-one. That’s a comfortable majority, big enough that Israel could afford to let its Arabs have citizenship, the vote, all the usual democratic rights. And it did.

Netanyahu’s solution to this dilemma is never stated explicitly, but a majority of Jewish Israeli voters understand and accept it. It is that the Arabs in the occupied territories will have to live under permanent military occupation, in order that Jewish Israelis may continue to live in a Jewish State that extends from the Mediterranean to the Jordan River.

In four consecutive elections in the past two years, Netanyahu has failed to get an outcome that delivers him a possible winning coalition. He’s playing for a deadlock and a fifth election now, but he may end up out of office and in jail instead.
Any politician who replaces ‘Bibi’, with or without another election, would pursue the same basic policy. The centre of gravity of Israeli politics is now far to the Right, and still moving rightwards. 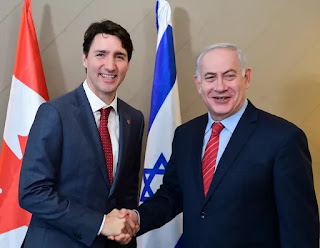 Every Canadian government, Conservative and Liberal, has condoned the permanent subjugation of Israel's Palestinian captives. That includes Justin Trudeau. On Israel and the Palestinians there's not much sunlight between Mr. Trudeau and his predecessor, Harper. They play a fanciful dance because to acknowledge the obvious would make them complicit.
Trudeau’s government has voted against more than 50 UN General Assembly resolutions upholding Palestinian rights. In 2015, he passed a motion condemning “any and all attempts” to promote the Boycott Divestment and Sanctions (BDS) movement, which calls for the boycotting of products and companies that profit from violating Palestinian rights, as well as cultural and academic institutions. Trudeau has directly linked BDS to anti-Semitism.

During the 2014 war on Gaza, Operation Protective Edge, Trudeau, then leader of the Liberal Party, stated Israel had the right to defend itself, and commended its commitment to peace, despite 2,200 Palestinians being killed in the 50-day conflict, which is being investigated by the International Criminal Court in The Hague for potential war crimes.

Canada continues to offer economic and trade assistance to businesses in Israeli settlements. Former Foreign Minister and current Deputy Prime Minister Chrystia Freeland even went so far as to say that Canada would act as an “asset for Israel” if it were to secure a seat on the UNSC.
Israel is an apartheid state and it has no intention of restoring the Occupied Territories to the rightful possessors, the Palestinians. Yet our leaders are all too quick to condemn anyone who criticizes Israel as anti-Semites, compounding their disgrace.
Gwynne Dyer is not one to grind axes. His take on international affairs, especially military, is well-informed and thoughtful. Israel is intent on keeping the Palestinian lands. There will be no two state deal. There will be no one state deal, at least not a one state deal that includes the Palestinians.
h/t Trailblazer