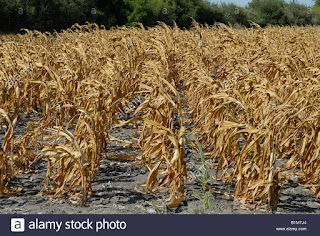 We are coming to realize that mankind is reaching our limits, albeit belatedly. That old line about giving 110 per cent is now about taking 150 per cent. That's precisely what we're doing. We're consuming the planet's resources at one-and-a-half times the level that Earth can sustainably supply. That's not good. As the line from the B-movie goes, "we can't go on living this way."

We can't but, don't worry, we won't. It's like an aquifer. It doesn't matter how many hundreds of thousands of years it may have taken for surface water to trickle down and fill it, if you start pumping it out to irrigate your crops in less than a century you may run it dry. What then? Indeed.

An article in the latest Foreign Policy contends that in our rush to feed eight billion human mouths, we have unleased industrial agriculture, Big Farma, and it's bringing us to the brink of ecological collapse. I won't quote from the article as I recently decided to let my overpriced subscription  lapse but, no matter, there's nothing really novel in it.

We've known for many years that intensive agriculture of the sort we need to feed our wildly excessive global population was backfiring on us. Coupled with steadily increasing applications of fertilizers, herbicides and pesticides, we've been degrading, in some cases severely, our finite stock of arable land.

In 2014 the UN Food and Agriculture Organization (FAO) summed up the latest research from leading agronomists to proclaim that we were exhausting productive farmland so rapidly that, on the course we were going, the world had but 60 harvests remaining. That's obviously a clumsy and somewhat ambiguous term but agricultural production will soon begin to drop off sharply. 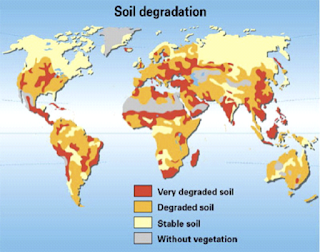 This graphic is several years out of date. The situation hasn't improved since then. The areas in red have or are losing their productivity with the dark yellow just behind. It's no surprise these include the world's major agricultural belts.

Look at the areas expected to be hardest hit by excessive heating this decade. Look closest to home - Central America and the Caribbean.

So what do we do when the primarily agrarian Central American states lose their ability to feed themselves, perhaps even losing the ability to work outdoors in recurrent heatwaves? Do the US and Canada become guarantors of their food supply? What if they migrate en masse? How altruistic, how compassionate are we feeling these days?

Is it still natural selection if we choose the outcome?

I've done three online courses on global food security so far. It's an area rich with scenarios in which questions vastly outnumber answers. Judging by how poorly we've handled something as straightforward as global warming it's clear there are other, also threatening, issues we'll let slide so long as we can get away with it. Then, when that day comes you have to deal with it, chances are you'll find you left it too late.