Chip, Chip, Chipping Away at Reproductive Rights in Washington 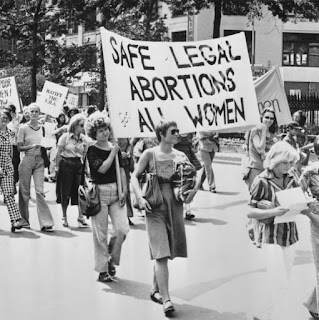 A case will come before the US Supreme Court this fall that opponents claim could mark the beginning of the end of Roe v. Wade.

The oh so enlightened state of Mississippi is defending its right to impose a 15-week limit on a woman's right to choose abortion. Before 15 weeks, maybe. After 15 weeks, no way.

Full confession, I never have delved into these issues. At best I have a Time Magazine grasp of the problem. That said I accept the principle that a woman's body is her business and I have no right to object.

A woman's constitutional right to abortion was established in 1973 in Roe v. Wade and the USSC reaffirmed that decision 19 years later.

Many Trump supporters wanted a corporation-friendly, socially conservative (i.e. reliably rightwing) Supreme Court. Trump appointed three, plenty to tilt the court balance. Gorsuch, Kavanaugh and Barrett will be expected to earn their spurs when this case comes before them.

I suppose its just an incredible coincidence, a total fluke, that this comes out of Mississippi to curtail women's rights just at the very same moment that the Slave States (yes, we can use that name again) are moving to curtail black voting rights again and the same time white supremacy is on a roll in the Klan, the Proud Boys and other brown-shirt packs.