As Long As They're Here, They Might as Well Make Themselves Useful. 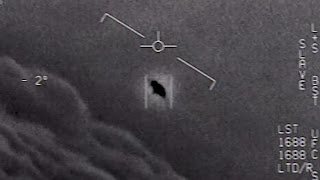 Next month, the US will release a report on everything (almost) the government knows about UFOs, now called UAPs or Unmanned Aerial Phenomenon.  The report is expected to include scores of sightings by military pilots.

For decades it was feared that rumors might stampede the public into a War of the Worlds panic. Those fears were shown unfounded when the Pentagon released video of unknown vehicles recorded by sensors aboard F-18 Super Hornets. Aside from the odd story on the evening TV news, it was a yawner. I guess with Trump still in the White House, Americans had more on their minds than little green men and their odd little capsules.

It's hard to imagine that the next report will send Americans running into the streets. Fair enough, but, if we (they) conclude that another form of intelligent life exists among us, maybe they should make themselves useful. With the knowledge they must have to manage inter-galactic travel, helping us deal with the climate crisis should be a snap. Same thing with these pandemics. They might even have a few tips on how homo sapiens can live in harmony with our own spaceship, Earth. We're going to have to figure that out eventually, unless nature sorts us out first.

Or maybe they're just here to measure for curtains, preparing to become the next global civilization once the clutter, i.e, homo sapiens, is cleaned up.