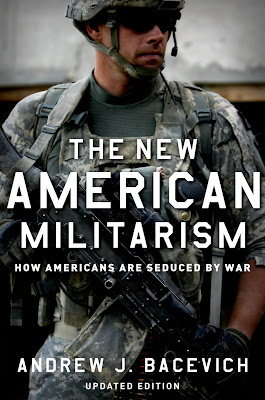 "We kept our country at peace. We never went to war. We never dropped a bomb. We never fired a bullet. But still we achieved our international goals."

C'mon, quick. When was the last year that America was not involved in active combat? You have to go back quite a ways, to the Carter administration.

The United States is and has almost always been in a state of war. Warfare has shaped the country, transformed what once aspired to be a democratic republic into a state burdened by a near permanent wartime economy.

In 1953, Dwight Eisenhower chose the president of General Motors, Charles Wilson, to become his defense secretary. In his confirmation hearing Wilson was grilled about whether his substantial holdings in General Motors could give rise to conflicts of interest. He replied, "I cannot conceive of one because for years I thought what was good for our country was good for General Motors, and vice versa. The difference did not exist. Our company is too big. It goes with the welfare of the country." Over time that was rehashed as "what's good for GM is good for the country."

Today, Americans have become inured to living in a permanent warfare state. It has been programmed into them. It has become part of mainstream thought, orthodoxy.

The latest polling figures show that only 14% of Americans saw this country’s “defense” efforts (as they’re always called, despite those “forever wars” in distant lands) as too much and would like to see military spending lowered. Half of all Americans consider the U.S. defense posture “just right” and 35% would like more of the same (up from 25% last year). In January, a Gallup poll indicated that 74% of Americans were “very or somewhat satisfied with the nation’s military strength and preparedness” and, in that context, the military always has a sky-high positive image in polling here — and it only rose in pandemic year 2020.
Retired US Air Force light colonel, William Astore, writes it's not enough to blame this on the Republicans and Democrats. There are more powerful forces at play, fueling the permanent warfare state.
First, such wars are beyond profitable, notably to weapons makers and related military contractors. Second, such wars are the Pentagon’s reason for being. Let’s not forget that, once upon a time, the present ill-named Department of Defense was so much more accurately and honestly called the Department of War. Third, if profit and power aren’t incentive enough, wars provide purpose and meaning even as they strengthen authoritarian structures in society and erode democratic ones. Sum it all up and war is what America now does, even if the reasons may be indefensible and the results so regularly abysmal.
The convenient veil of the "all-volunteer army."
With the military draft gone for the last half-century, most Americans have voted with their feet by not volunteering to become “boots on the ground” in the Pentagon’s various foreign escapades. Meanwhile, America’s commanders-in-chief have issued inspiring calls for their version of national service, as when, in the wake of 9/11, President George W. Bush urged Americans to go shopping and visit Disney World. In the end, Americans, lacking familiarity with combat boots, are generally apathetic, sensing that “our” wars have neither specific meaning to, nor any essential purpose in their lives. ...We’re essentially told to cheer “our” troops on, but otherwise look away and leave war to the professionals (even if, as it turns out, those professionals seem utterly incapable of winning a single one of them).

You know that yellow “crime scene” tape the police use to keep curious bystanders at bay? Our government essentially uses “war scene” tape to keep the curious among us from fathoming what the military is doing across so much of the world. That “tape” most often involves the use of classification, with everything that might matter to us designated “secret” or “top secret” and not fit for our eyes to see. This cult of secrecy enables ignorance and reinforces indifference.

Anyone like a Chelsea Manning or a John Kiriakou who seeks to cut that tape and so let ordinary citizens examine any of our war crime scenes in all their ugliness is punished. You, John Q. Public, are not supposed to know of war crimes in Iraq. You, Jane Q. Public, are not supposed to know of CIA torture programs.
The Triumph of the Military-Industrial Complex.
For a self-styled democracy that should abjure such conflicts, war has instead become both omnipresent, omni-absent (if you’ll let me invent a word for our strange situation), and oddly mercenary in these disunited states of ours. Borrowing a line from The Godfather, war isn’t personal in America, it’s strictly business. Basically, this country has its very own powerful warlords, even if they don’t have personal names, just collective ones — like Boeing, Lockheed Martin, and Raytheon. In those wars of “ours” lies undeniable evidence that corporations are indeed citizens, as the Supreme Court declared in 2010 by judicial fiat in the eerily named “Citizens United” case. As a result, America’s corporate warlords are now a new kind of ultra-powerful citizen. Think of them as warped versions of Marvel superheroes, collectively profiting from incessant conflict.
A Nation Transformed, Edging Steadily Closer to a Decisive Confrontation.
While our coins still say “In God We Trust,” the god our nation’s leaders profess to trust is most assuredly a warrior, not the prince of peace. Under the circumstances and against a backdrop of perpetual war, no one should be surprised that this country is increasingly wracked by conflict and rent by violent impulses.
Astore concludes with what strikes me as a grim conclusion about starkly differing options.
I see two possible paths for this country. One is to work to find ways to end all our wars and the massive global military presence that goes with them. In the process, we would begin to dismantle our imperial war machine and so hobble the military-industrial complex and its warlords. The other is the path this country remains on (despite Joe Biden’s inclination to end the Afghan War). If followed, it will continue to allow the petty Caesars among us to rage until this imperial power finally collapses under the weight of its military excesses and failures. One path would lead to a possible restoration of democracy and citizen empowerment as America’s founders intended; the other will undoubtedly terminate in the chaos of slow-motion collapse in a world threatened by nuclear annihilation.
To those familiar with Bacevich's 2010 book, there's been precious little progress on democratic restoration since then. What will it take to stir the American people to throw off this suffocating blanket of militarism?