About that Separation of Church and State Thing. 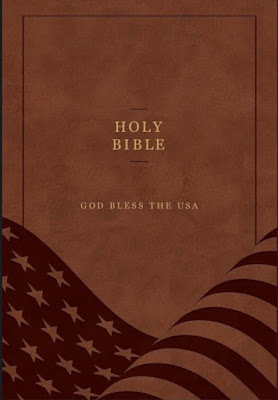 America has a new Bible. It's the "God Bless the USA Bible." Think of it as the scriptural equivalent of Reese's pieces - a little chocolate, a little peanut butter sort of thing.

The “God Bless the USA Bible” is expected to go on sale in September, in time to commemorate the 20th anniversary of the Sept. 11 terrorist attacks, according to a Nashville-based marketer who will distribute the book.

The Bible will also include lyrics from singer Lee Greenwood’s hit song “God Bless the USA,” which topped pop charts after Sept. 11, 2001. Using the historic King James Version, the “God Bless the USA Bible” has about 600 pre-orders for $49.99 and will ship in September, said Hugh Kirkpatrick, who said he wanted to inspire unity in the country.
Where is Barry Goldwater now that we need him. Blasphemy in the defence of liberty is no vice.