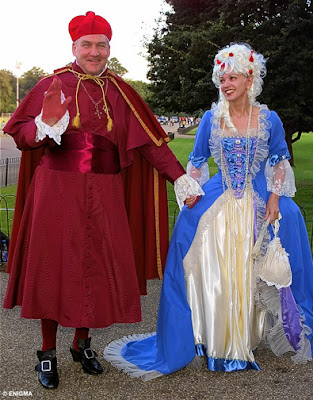 Erin O'Toole is an utter failure.

Such is the verdict of former Canadian and disgraced life peer, Lord Conrad of Piddle Puddle. Connie laments that the last truly successful Tory leader was Brian Mulroney who delivered back-to-back majorities. As it turns out, Lord Black doesn't think much of the rest, Harper included. Methinks his IBS is acting up again.

Since it is the Conservative party, it naturally provides the electoral home for those who espouse conservative values. But instead of defending this as policy, the Conservatives endlessly fritter and agitate between easily caricaturable and ineptly formulated positions on fringe issues such as abortion, gender, exotic environmental matters and Indigenous questions, and allow the Liberals to run up and down their backs in hob-nailed jack-boots masquerading as the party of contemporary liberal enlightenment. The result is that the Conservatives are perceived as “harsh,” as was said of the unexceptionable budget that was used as the pretext for bringing down Joe Clark’s ephemeral government in 1979, or “scary,” as the Liberals have repeatedly painted their rivals. Tories allow themselves to be seen as wafflers, trying to suck and blow at the same time, throwing a lifeline to Old Testament notions of anti-choice and white male supremacy, while making insincere and inadequate gestures to more progressive sections of the electorate.

This dismal performance has essentially been repeated by all 10 Conservative leaders between Robert Borden and Brian Mulroney (1921-1984, in which time only Arthur Meighen, R.B. Bennett, John Diefenbaker and Joe Clark were prime minister for a total of 13 years), and the six post-Mulroney Conservative leaders, of whom only Stephen Harper was elected prime minister due to the popularity of the NDP and Bloc Québécois, which were able to siphon enough votes away from the Liberals in key ridings. This came to a shuddering end in 2015 when Harper invited himself to be portrayed (not very inaccurately) as an inflexible, desiccated old Tory who was entrenched in the political Dark Ages.

Andrew Scheer actually won the popular vote two years ago, but still managed to lose in the traditional conservative manner, and the new leader, Erin O’Toole, ran as a red Tory against Scheer and Maxime Bernier four years ago, and as a traditionalist against Peter MacKay last year, and has since been bumping along, singing the same old discordant Conservative song of a non-conservative Conservative who can also be a better liberal than the Liberals. It has never worked, it won’t work now, and even those who might like it to work generally conclude that it is hopeless. The Liberals are incompetent, but they run slick election campaigns, which makes them a force to be reckoned with. As late Liberal confidant Jack Pickersgill used to say, “We’re the party of government and the Conservatives are the mumps: you get them once in your life.”
Connie's prescription? Let'em eat cake. Screw the pandemic, full speed ahead. A little masking and a bit of social distancing, perhaps, but nothing like the overkill (that has now brought Canada's infection rates up to America's) of closures and lockdowns. It seems Conrad doesn't realize closures, lockdowns and other measures are under provincial jurisdiction. Then again who are we to judge?
He proclaims (with some justification) Liberal performance on indigenous issues a failure. Then moves on to the biggest fraud of them all - climate change, the Grand Hoax.
Even if global warming is as big a threat as its most ardent proponents claim — which it most certainly is not — Canada’s carbon footprint is irrelevant to the world: the principal polluters, China and India, do not recognize the issue, and this government has no excuse for declaring war on the country’s greatest industry (energy) and on two of our provinces, all thanks to its spurious misreading of ecological needs. What is needed is massive vigilance and research to spare us, and the world, from the self-destructive bungling of an issue that has not been adequately explored. We don’t know enough about climate change and the world’s temperature has not risen much in the last 30 years.

Black wraps up with a suitably 18th century flourish:
May God, if He is still listening despite official attempts to banish him (including by this government’s former governor general who was fired by her office staff and a consultant), and the voters, save our country.
"Our country"? Connie what country would that be? Your country is Britain. You are still, by some accounts, a life peer. Your place is in the House of Lords. Your country is not Canada. You made that clear when you gratuitously insulted the people of Canada as you renounced your Canadian citizenship. And, besides, you're a jailbird. Trump pardoned you but that didn't erase your conviction. You're a convicted felon and, as such, inadmissible for entry to Canada. It'll take a Conservative prime minister to undo that and you just spent nine column inches pissing all over those guys.