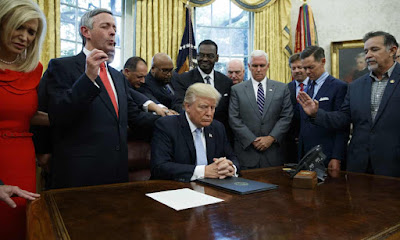 America's Old Testament Taliban, a.k.a. Christian evangelicals and fundamentalists, are finally losing ground. But they won't go without a fight.

Just 47% of the US population are members of a church, mosque or synagogue, according to a survey by Gallup, down from 70% two decades ago – in part a result of millennials turning away from religion but also, experts say, a reaction to the swirling mix of rightwing politics and Christianity pursued by the Republican party.

Gallup began asking Americans about their church membership in 1937 – and for decades the number was always above 70%. That began to change in 2000, and the number has steadily dropped ever since.

Some of the decline is attributable to changing generations, with about 66% of people born before 1946 are still members of a church, compared with just 36% of millennials.

Among other groups Gallup reported, the decline in church membership stands out among self-identified Democrats and independents. The number of Democratic church members dropped by 25% over the 20-year period, with independents decreasing by 18%. Republican church members declined too, but only by 12%.
David Campbell, professor and chair of the University of Notre Dame’s political science department and co-author of Secular Surge: A New Fault Line in American Politics, said a reason for the decline among those groups is political – an “allergic reaction to the religious right”.