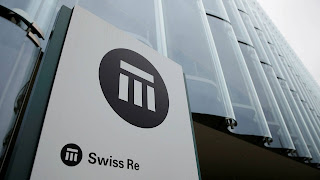 The fossil energy industry relies on political collaborators to thwart meaningful action on greenhouse gas emissions. These Carbon Quislings routinely warn that the sky will fall without fossil fuels and, so far, they've been pretty effective.

When it comes to making sense of climate change, the canary in the mine is often the re-insurance giants like Munich Re or Swiss Re. These are the companies that commercial insurance companies use to cover their bets. It's insurance for insurance. When these re-insurers speak it's wise to listen.

Rising temperatures are likely to reduce global wealth significantly by 2050, as crop yields fall, disease spreads and rising seas consume coastal cities, a major insurance company warned Thursday, highlighting the consequences if the world fails to quickly slow the use of fossil fuels.

The effects of climate change can be expected to shave 11 percent to 14 percent off global economic output by 2050 compared with growth levels without climate change, according to a report from Swiss Re, one of the world’s largest providers of insurance to other insurance companies. That amounts to as much as $23 trillion in reduced annual global economic output worldwide as a result of climate change.
The report notes that, if we don't meet the emissions targets agreed to at the 2015 Paris climate summit, the Canadian economy could shrink between six and ten percent by 2050.