Chretien's Folly - Heading For the Bottom? 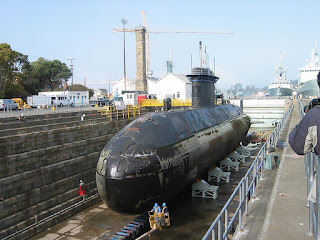 There are some Liberals who see Jean Chretien as a great man, one of Canada's finest prime ministers. I liked Chretien but 'great'?

I associate Mr. Chretien with three things - scandal, especially the Sponsorship Scandal that served as Stephen Harper's springboard to power; a Quebec sovereignty referendum that Chretien took for granted and damned near lost; and the utterly boneheaded decision to pay good money for castoff submarines mothballed (after just 3 years in service) for many reasons by the Royal Navy. I like to think of the subs as Chretien's Folly.

We bought four of these 1990-vintage Upholder class boats after a Brit deal to unload them on Pakistan fell through. They look like real submarines only way shorter. They were supposed to be a great deal but only proved the adage about "penny wise, pound foolish." They're unreliable, outdated, fraught with defects and bleed the Canadian navy budget just tied up at dockside (where you'll find them when they're not in dry dock). It was reported that Canada's submarine fleet logged an impressive zero hours at sea last year at a cost of about $300 million.

But don't worry, things are looking up only no, they're not. It's the Cornerbrook again. This sub has had its share of woe and strife.

HMCS Corner Brook has been hit particularly hard, with the vessel docked for extensive repairs and maintenance for the past six years after striking the bottom of the ocean off B.C. in 2011. A fire also broke out while it was docked in Victoria in August 2019.
This time the Cornerbrook was gored when the company contracted to maintain our sub flotilla messed up a test of its ballast tanks.
...one of Corner Brook’s main ballast tanks ruptured last March during a test by Babcock Canada, which has been contracted to maintain and repair the sub fleet since 2008. The government recently extended Babcock’s contract to 2023.

“The test consisted of the tank being largely filled by water with air added to apply the required test pressure,” reads the Aug. 6, 2020 report prepared for the deputy minister of the Department of National Defence.

“After the tank successfully met this requirement, the final step was to drain the tank. This was intended to be done by gravity, however members of the test team attempted to accelerate drainage of the tank by re-applying pressure.

“In doing so, they inadvertently over-pressurized the tank and caused it to rupture.”

Defence officials have previously said the incident would delay the Navy’s plans to get the Corner Brook back in the water. The submarine was supposed to return to service last summer, but will now remain docked until at least June.
“A full repair of the damage is impractical and would not be economical,” the report reads. “There is the potential that the post-repaired condition will still present undesirable risk, in which case the residual risk will be presented to the Navy for acceptance.”

The report underscores the importance of maintaining the "structural integrity" of main ballast tanks to the safe operation of a submarine. They are used in controlling whether the vessel goes up or down in the water.

“Otherwise the submarine may not be able to surface (including surfacing from depth in an emergency due to flooding) or remain stable on the surface, either of which could lead to loss of the submarine,” the report reads.
A full repair is impractical and may not be economical. Wait a second. This is a submarine. You don't send people into the depths in a dodgy boat because repair is not economical. Notice what's missing from all this blather? Any mention of the crew. You might lose the submarine. Not a peep about what that could mean for the crew. 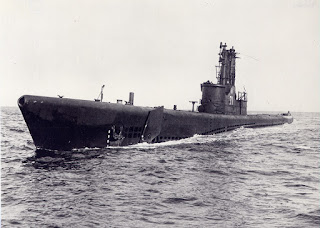 This reminds me of another Canadian sub, HMCS Grilse. It too was a castoff from the US Navy. It was one of those rakish boats the Americans used against the Japanese to great success. By the time it fell into Canadian hands, however, it was pretty long in the tooth. When I first saw it at the dock in Esquimalt there was a full size B.C. Tel phone booth on the foredeck. Like today's subs, Grilse had seen her better days (the difference is she had some better days). She was still being used as a detection target for Canadian destroyers and frigates. Also like Cornerbrook, no one was sure when Grilse went down that she'd be coming up again. As a precaution, Grilse was not permitted to submerge unless she had a surface escort directly overhead.
Grilse met her end off San Clemente Island in 1969 when US helicopters used her for torpedo practice. We ought to ask the Americans what they'd give us for Cornerbrook.