A War We Fought to Lose 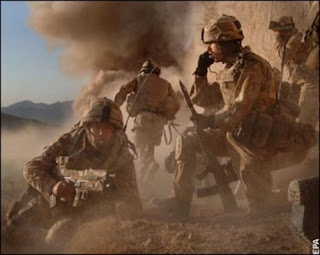 Joe Biden has announced all American and NATO troops will be out of Afghanistan by September 11.

You may commend Biden's courage. You may condemn Biden's fecklessness. Doesn't make a damned bit of difference. The only thing Biden had to decide was how much longer America would continue to lose its war of folly in Afghanistan.

I think it was a North Vietnamese fellow, perhaps Brother Ho himself, who said that America had all the watches but the Vietnamese insurgents had all the time. Eventually mainstreet America would grow tired of an unwinnable war and would demand their troops be brought home. That's precisely what happened.

Afghanistan was never the charnel house that Vietnam was for America. Afghanistan has claimed under 2,400 American dead. Vietnam tallied over 50,000. The Afghan war was waged with an all-volunteer army. Vietnam was fought largely by draftees. During Vietnam, young people flooded America's streets in angry protests. Not much of that for the Afghan clash. Different as these two wars were, what they had in common was there was no victory to be had. Both wars were unwinnable. Both wars dragged on far past their 'best before' date.

It's not that America's commanders didn't try to win in Afghanistan. That's not true. They didn't try. In fact, they put together one of the finest handbooks on asymmetrical war, insurgency. They collected the wisdom of guerrilla warfare going back to Julius Caesar and put it all in a field manual, FM 3-24. I've got a copy and it's right on the money.

Armed with all this wisdom, American (and NATO) commanders took FM 3-24 and just threw it away. They ignored it, especially the bits that warned that, if you do thus and so, you're going to lose. In doing that, they fought to lose.

They tried to fight the Afghan war on the cheap. Not enough soldiers, not enough money, no real will to win a peace that the Afghan people would fight to defend. It says right in their field manual that counter-insurgency warfare is the most protracted, most personnel intensive and most costly form of warfare there is. That's the truth. You either go big or you go home.

The war America and her allies fought wasn't really war at all. It was high velocity whack-a-mole. We were just babysitting an unresolved civil war. Some things don't change.

After Vietnam came the blame game. The military brass who never could figure out how to defeat the North Vietnamese and Viet Cong tried to blame the politicians.  The political side blamed the military. The public blamed them both.

I came across an item in the Times of India today. It seems Washington is trying to cajole India into sending forces into Afghanistan if only to keep Pakistan in line. Somehow I doubt Modi will fall for it but you never know.