"Peace with Honour" or "The Will Is Gone." 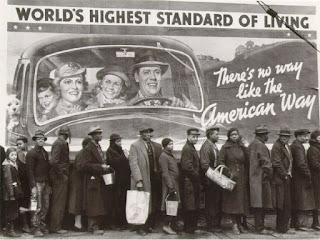 What is America? What will America be in 10 or 20 years?  The United States is a country undergoing rapid change and, to some extent, dragging the West along with it. Its government is deeply dysfunctional, presided over by a "bought and paid for" Congress. The vaunted democratic republic has become a transactional democracy, another term for oligarchy. In some ways the US seems to be following a form of governance that plagued Rome in the final two centuries before its fall.

Dwight Eisenhower, before leaving the White House, warned the American people to be wary of the emerging "military-industrial complex."

In the councils of government, we must guard against the acquisition of unwarranted influence, whether sought or unsought, by the military-industrial complex. The potential for the disastrous rise of misplaced power exists and will persist. We must never let the weight of this combination endanger our liberties or democratic processes. We should take nothing for granted. Only an alert and knowledgeable citizenry can compel the proper meshing of the huge industrial and military machinery of defense with our peaceful methods and goals, so that security and liberty may prosper together.
Eisenhower's "disastrous rise of misplaced power" has become a reality. Vietnam veteran, turned US Army commander turned academic, Andrew Bacevich, describes its modern iteration as a military-industrial-neoconservative-Christian evangelical-commercial warfighting complex that has the heart of his nation in the firm grip of its tentacles. (More here, here and here)
Eisenhower warned the American people must be vigilant, and take nothing for granted lest this fledgling military-industrial complex endanger their "liberties or democratic processes."  Bacevich and others contend this is what has happened. The American people, relieved from their connection with their country's military forces by the introduction of an all volunteer, out of sight/out of mind, military have gone about their merry business and ignored the malignancy that has swept through America's armed forces. This, he argues, has been instrumental in creating today's "wars without end" where victory is always out of reach and defeat is a fate deferred.
Afghanistan.
The U.S. war in Afghanistan has to date claimed the lives of more than 2,300 U.S. troops, while wounding another 20,000. Staggeringly larger numbers of Afghans have been killed, injured, or displaced. The total cost of that American war long ago exceeded $2 trillion. Yet, as documented by the “Afghanistan Papers” published last year by the Washington Post, the United States and its allies haven’t defeated the Taliban, created competent Afghan security forces, or put in place a state apparatus with the capacity to govern effectively. Despite almost 20 years of effort, they haven’t come close. Neither have the U.S. and its NATO coalition partners persuaded the majority of Afghans to embrace the West’s vision of a suitable political order. When it comes to the minimum preconditions for mission accomplishment, in other words, the United States and its allies are batting 0 for 4.
America's war on the Taliban is now on its fourth presidency and, as in Viet Nam, there'll be no victory. Nixon tried to mask defeat by declaring "peace with honour" but you can't pull that trick twice.
It was 1889 when Rudyard Kipling's poem, "The Young British Soldier," was published. One verse dealt with Afghanistan:
When you're wounded and left on Afghanistan's plains,
and the women come out to cut up what remains,
jest roll to your rifle and blow out your brains
and go to your gawd like a soldier.
I suppose George w. Bush and Dick Cheney didn't read a lot of Kipling. They also didn't read their own military's excellent counter-insurgency field manual, FM 3-24. Fifteen years ago I wrote a post about the lessons of FM 3-24 and how they weren't sinking in. Here we are fifteen years later and none the wiser.
It was no small irony that general David Petraeus commanded the team of military and civilian experts that wrote FM 3-24 only to ignore its lessons when he was given command of US and allied forces in Afghanistan.
Whether the U.S.-led effort to align Afghanistan with Western values was doomed from the start is impossible to say. At the very least, however, that effort was informed by remarkable naïveté. Assessing the war a decade ago — 10 years after it began — General Stanley McChrystal, former commander of all coalition forces there, lamented that “we didn’t know enough and we still don’t know enough” about Afghanistan and its people. “Most of us — me included — had a very superficial understanding of the situation and history, and we had a frighteningly simplistic view of recent history, the last 50 years.”
...it fell to the president of the United States, commonly and without irony referred to as “the most powerful man in the world,” to decide where U.S. bombs were to fall and U.S. troops arrive. When American forces flexed their muscles in faraway places, ranging from Panama, Iraq, Somalia, Haiti, Bosnia, Kosovo, Serbia, Afghanistan, Sudan, and the Philippines to Afghanistan (again), Iraq (again), Libya, various West African countries, Somalia (again), Iraq (for a third time), or Syria, authorization by the United Nations Security Council or Congress ranked as somewhere between incidental and unnecessary. For military actions that ranged from full-scale invasions to assassinations to a mere show of force, whatever justification the “leader of the Free World” chose to offer was deemed sufficient.
How this ends, if it ever does.
The longest war in U.S. history should by now have led Americans to reflect on the consequences that stem from succumbing to imperial temptations in a world where empire has long since become obsolete. Some might insist that present-day Americans have imbibed that lesson. In Washington, hawks appear chastened, with few calling for President Biden to dispatch U.S. troops to Yemen or Myanmar or even Venezuela, our oil-rich “neighbor,” to put things right. For now, the nation’s appetite for military intervention abroad appears to be sated.

But mark me down as skeptical. Only when Americans openly acknowledge their imperial transgressions will genuine repentance become possible. And only with repentance will avoiding further occasions to sin become a habit. In other words, only when Americans call imperialism by its name will vows of “never again” deserve to be taken seriously.

In the meantime, our collective obligation is to remember. The siege of ancient Troy, which lasted a decade, inspired Homer to write the Iliad. Although the American war in Afghanistan has now gone on almost twice as long, don’t expect it to be memorialized in an epic poem. Yet with such poetry out of fashion, perhaps a musical composition of some sort might act as a substitute. Call it — just to suggest a title — “Requiem for the American Century.” For one thing should be clear by now: over the course of the nation’s longest war, the American Century breathed its last.
Ten years from now, Afghanistan may again be in the hands of the Taliban, the ungovernable country again mired in civil wars. As for the United States, its future is untellable. How many of us foresaw Covid 19 as midnight ushered in a New Year, 2020?  Internally, the US does seem to be circling the drain with the White Right no longer making any effort to conceal their desperate bid to cling to power over the Left and visible minorities.