Is This the Event We Were Warned Of? 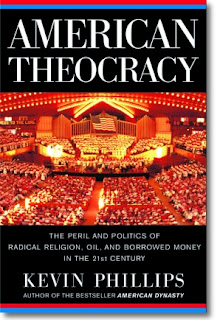 Two themes are emerging in reports on Covid-19. One is that the Western economies are being hard hit, plunging deep in debt to prop up/avert the collapse of their societies until the pandemic passes. The other is that China is poised to emerge from the pandemic as a very dominant superpower.

While we're struggling to tread water, 2021 is predicted to see China's economy grow by six per cent or more. Could the virus, first detected in Wuhan, put China firmly in the global driver's seat?

15 years ago, in the now distant era of Bush-Cheney, an "old school" Republican insider, Kevin Phillips, wrote a book, "American Theocracy," that explored how radical religion, radical politics, the transformation of America's economy in the age of globalism and "peak oil" might leave the United States and the global economy almost unrecognizable. Phillips obviously got the peak oil part wrong but the rest of his analysis still resonates.

For this discussion let's focus on just one area, the transformation of the American economy, going back to the Reagan era and the adoption of neoliberalism.

Phillips examined the succession of once dominant economies from the early 18th century onwards - Spain, the Netherlands, France, Britain and the United States. An eerily similar pattern emerged. They all went from a primarily agricultural economy before transitioning to a primarily trading/manufacturing economy and finally ending in what some call a FIRE (finance, insurance, real estate) economy.

What Phillips discerned was that this three-stage progression was accompanied by steadily increasing wealth and prosperity.  Economic strength, however, was not as linear. The economy of each of these nations was strongest, most robust, in the middle or trade/manufacturing stage.  The third stage, the FIRE period, saw great wealth masking an atrophying economy.

The author put it succinctly. Each of these countries rose to dominance through trade/manufacturing. That ended with the realization that a financialized economy could produce even greater wealth. The hard labour could be shopped out to lesser and relatively impoverished countries. Each dominant nation, he wrote, used its wealth to grow its successor's economy. In the result the dominant nation's economy grew weaker, more vulnerable. The "prosperity disease" doomed the country at or near its zenith.

Phillips concluded that trade/manufacturing economies recover quite well from disruptive events such as disease, war or recessions.  FIRE economies, by contrast, are more brittle, less robust. At first they rebound well from setbacks but their ability to recover from subsequent disruptions slows, weakens. The dominant country grows weaker as its successor grows stronger. Sometimes the end is marked by wars, sometimes the transition is non-violent. Thucydides' Trap.

Is this what's underway now between China and the West, particularly the United States? Is Covid-19 the coup de main foretold in Phillip's book? It seems to fit the bill.

China may be showing the world that capitalism and globalism flourish best under authoritarian governance, not democracy. It wasn't just cheap labour that corporations chased as they pulled their production operations out of Western countries. It was also host governments that could spare them the messy and costly problems of democratic states - labour laws, strikes, environmental regulation.

Then there's the Golden Rule - He Who Has the Gold, Rules. We may not like China's rules but can we reject them? Consider how China has dealt with the democracy movement in Hong Kong? Consider the changes it has imposed since occupying Tibet. Then there is the repression of the Uighurs who are being herded into camps. Does China represent a military threat? Ask India, not Washington. Ask every country whose survival depends on access to the Himalayan headwaters. Ask the nations of the South China Sea. There's more, much more.

For years China kept assuring the West that it really had no ambitions beyond its borders. It was no threat to any of its neighbours or any other country.

I think this is one area that Kevin Phillips got right.