This is Our New Normal and, No, We're Not Prepared For It. 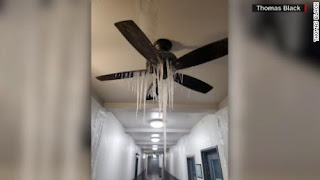 While all eyes are on Texas, the foibles of Ted Cruz, etc. there's scant mention of the heatwave over Greenland in the 24 hr. darkness of the Arctic winter. Greenland is about 20C above normal in the pitch black. The same unseasonal heating is happening in other Arctic regions. It's the very same anomaly that brought the deep freeze to the US south. Greece and Turkey are also enduring freezing conditions. It's the same deal - Hadley Cells and Rossby Waves. 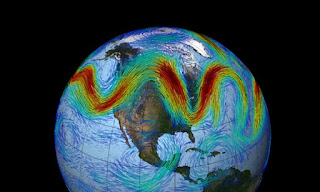 Whenever some place gets hit by abnormal freezing conditions the first question should be, okay, so where's the heat? You'll find it but it's in the far north, sometimes well inside the Arctic Circle. It's the "conservation of energy" thing, the First Law of Thermodynamics.  Energy cannot be created or destroyed. It can, however, move around and it often catches us unprepared when it shows up on our doorsteps unannounced.  A few years ago, in late January/early February, road and highway transportation came to a halt as Atlanta, Georgia entered a deep freeze. At the same time, residents of Barrow, Alaska basked in 64F conditions.

In February, 2018, in the 24 hour darkness of the Arctic winter, inside the Arctic Circle it was so warm that the ice began melting. At the same time, most of Europe and the Mediterranean froze from what they called the "Beast from the East." 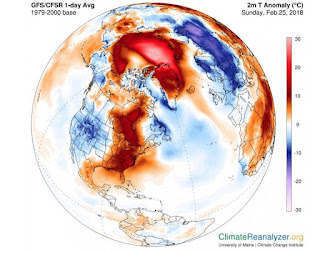 See? If the heat is gone, it's somewhere else and it's not very hard to locate.

This is more than an interesting curiosity. It means that virtually every place in the Northern Hemisphere now must prepare for both extreme heat and extreme cold. We need a level of resilience an order of magnitude greater than anything we envisioned when most, nearly all of our critical infrastructure was designed and built. We need a level of resilience that does not yet exist. We're a lot like the first of the Three Little Pigs.The gently undulating jet streams of the Holocene brought us predictable weather patterns that travelled west to east. Now we have these Rossby Waves that carry tropical air far into the north and Arctic air far into the south - and just park there, sometimes for several days. This phenomenon, in its summer livery, drowned Calgary when a heavy rain storm that once would have deluged the city and then moved on, instead stayed put.  The rain that inundated Calgary belonged somewhere else -  or it would have in a better, more-predictable time. This is our new normal.