The Times in Which We Live - If You Can't Govern, Lie 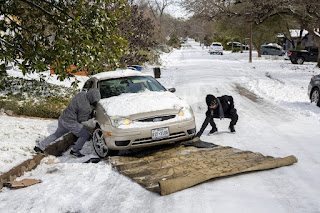 Don't Mess With Texas - at least not while it's neck deep in a mess of its own making. But when you're the government, go for the easy out - lie your arse off.

Incompetence is not the purview of one party. But when you view politics as theater and grievance-mongering, chances are you are going to shortchange governance. Elect a president with no public-sector experience, no interest in learning, no desire to hire competent people and no ability to accept responsibility, and you get something like the covid-19 debacle. Moreover, if your party is hostile to government and exercising regulatory power because it is beholden to a donor class and right-wing ideologues, you will not be prepared for disasters when they strike.

And that brings us to Texas. The Post reports, “As millions of people across Texas struggled to stay warm Tuesday amid massive cold-weather power outages, Gov. Greg Abbott (R) directed his ire at one particular failure in the state’s independent energy grid: frozen wind turbines.” There is one problem: That is not remotely true (as you might have guessed from a state with an enormous oil and gas sector). “The governor’s arguments were contradicted by his own energy department, which outlined how most of Texas’s energy losses came from failures to winterize the power-generating systems, including fossil fuel pipelines.”

In other words, rotten policy and management are to blame. “What has sent Texas reeling is not an engineering problem, nor is it the frozen wind turbines blamed by prominent Republicans,” The Post reports. “It is a financial structure for power generation that offers no incentives to power plant operators to prepare for winter. In the name of deregulation and free markets, critics say, Texas has created an electric grid that puts an emphasis on cheap prices over reliable service.”
Then there was this from Tim Boyd, the former (?) mayor of Colorado City.
We're hearing a lot about this deep freeze that has the US and parts of Canada in its grip. What are we not hearing about? That would be what's going on in Greenland and the high Arctic. Guess what? It's unduly warm in Greenland and environs.
"It's been a major breakdown,'' said Jennifer Francis, a climate scientist at the Woodwell Climate Research Center on Cape Cod. "It really is the cause of all of these crazy weather events in the Northern Hemisphere."

"We've had everything you could possibly think of in the past week," said Northern Illinois University meteorology professor Victor Gensini, noting that parts of the U.S. have been 50 degrees (28 degrees Celsius) colder than normal. "It's been a wild ride."

It was warmer Tuesday in parts of Greenland, Alaska, Norway and Sweden than in Texas and Oklahoma. And somehow people in South Florida have been complaining about record warmth that is causing plants to bloom early.
Wildly fluctuating temperature extremes, highs and lows. This is our new normal. The lesson being taught in Texas is that the climate will "mess with Texas" and the only thing the Lone Star state can do is prepare itself for these events. It's a matter of building resilience to protect the people and state. The power grid failed to meet demand because it wasn't built to meet this demand. It also fails in summer heatwaves. The wind farms failed because they weren't built to work in deep freeze conditions. Gas lines failed, ditto. Pipes froze, ditto.