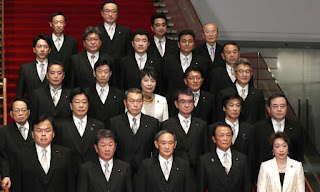 The Japanese government has been catching hell from the International Olympic Committee over its sexist policies. Former Japanese prime minister, Yoshiro Mori, headed Tokyo's Olympic Organizing Committee until it came out that he said meetings attended by "talkative women" tended to "drag on." Mori resigned.

The secretary general of the ruling Liberal Democratic Party, Toshihiro Nikai, moved quickly to address the gender gap by adding a few women to the cabinet. Then this happened:

Nikai’s attempt to address the yawning gender gap in his party quickly unravelled when it became clear that the small groups of women attending the meetings were expected to be seen but not heard.

The LDP, which has governed Japan almost unchallenged since 1955, had proposed allowing groups of about five women to attend meetings of its 12-member board, 10 of whom are men, on condition they remained silent observers.
The secretary general decided women "observers" should put their thoughts in writing and send them in.