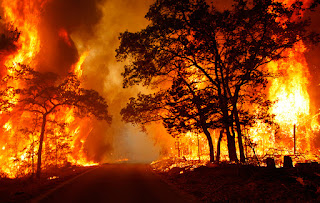 It's an old phrase that has taken on a new meaning in the Anthropocene epoch. Wildfires that sweep vast regions, year after year, sometimes spreading at such speed that they overtake people desperately making for safety they never find. Whether through mostly natural causes or through land clearing, wildfires have become a dire problem across western North America, southern Europe, Siberia, the Amazon, Southeast Asia and Australia.

A study conducted by The Guardian finds that not only are these wildfires worsening but they're shifting from grassland fires that dominated the past to woodland or forest fires that impact us today. Climate heating is a major contributory cause of this chaos.

In recent years, fires have devastated areas of California, Australia, Siberia and the Pantanal that used to be relatively unaffected. In Africa, by contrast, there has been a reduction of savannah fires.

Experts believe the changing fire patterns are driven by human factors: global heating, which is creating more tinderbox conditions in forests, and land conversion, which is turning grasslands into farm fields, conurbations and roads.

The causes and consequences are still being studied, but scientists are concerned this shift will put more carbon dioxide into the atmosphere from forests, while eroding the unique bio-vitality of grasslands, which are better adapted to fire.

“Since the early 2000s, we are seeing a decline in grassland fires, which dominate the global numbers. At the same time, there is an increase in some high-fuel systems such as the western US that several studies have connected to climate change,” Niels Andela, an expert in remote sensing at Cardiff University, said. “This trend is not yet visible everywhere, but it is likely to become more apparent in other parts of the world.”

Once again, the quiet killer of climate change, "creeping normalcy" comes into play. Creeping normalcy is about forgetting the past. Layer upon layer of forgetting blurs our vision, buries our memories and our understanding of the world changing beneath our feet.

Jared Diamond and others write of "creeping normalcy." It's our ability to forget even the recent past and accept whatever is today as the standard. Imagine if we could pluck a dozen people of various ages from the 1960s (back when there were fewer than half as many humans as now exist) and let them experience the weather and climate today. Introduce them to today's severe storm events of increasing frequency, intensity and duration. Show them what has happened to our glaciers, ice caps and sea ice. Let them see Atlanta, Georgia and Houston, Texas paralyzed by deep freeze. Play for them the video of fires racing through entire neighbourhoods, consuming everything in their path. Imagine how they would react.

Creeping normalcy is blinding us to the urgency of this climate crisis and it too is spreading like wildfire, even if we don't notice. As the fires spread our focus narrows and dims.