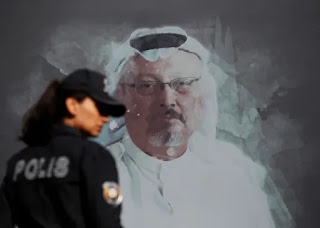 The report, an unclassified summary of findings across the intelligence community produced by the Office of the Director of National Intelligence (ODNI), will be made public as early as next week, according to people familiar with the matter.

Plans for the release come as U.S.-Saudi relations have tumbled to a new low in recent weeks, with the administration canceling arms sales, criticizing human rights abuses and the harassment of dissidents, and pledging to “recalibrate” ties with the kingdom.
In what was widely seen as a snub, White House press secretary Jen Psaki said Tuesday that President Biden, who has not yet communicated directly with Saudi rulers, would not be speaking with the crown prince, known as MBS, the country’s de facto leader.

“The president’s counterpart is King Salman,” the crown prince’s aging father, she said, “and I expect that, in appropriate time, [Biden] would have a conversation with him.”

The release of the Khashoggi report may make that a fraught exchange. “I think it’s going to put Biden on the spot,” said David Ottaway, a longtime Saudi expert at the Wilson Center. “He’s going to have to define what his relationship is going to be with the leadership, and what steps he’s going to take in response.”

“There are so many things weighing on the relationship, and I feel it’s going further south,” Ottaway said.
Trump courted bin Salman's favour and let the Khashoggi murder fade into obscurity.
The Saudis effective ruler isn't the only regional leader feeling snubbed by Biden. Israel's Benjamin Netanyahu has also been given the cold shoulder to the point that it wasn't until yesterday that the new president made the obligatory call to his Israeli counterpart.
ISRAEL’S MEDIA and political class have been aflutter about the delay in contact between Prime Minister Benjamin Netanyahu and President Biden. During the first four weeks of the new U.S. administration, Mr. Biden spoke by phone with the leaders of virtually every major U.S. ally, along with those of Russia and China. But he did not call Mr. Netanyahu until Wednesday. Though the White House says the delay was “not an intentional diss,” Israelis weren’t buying it: “It is a clear sign of [Mr. Biden’s] displeasure,” said Dani Dayan, a Netanyahu opponent who served as Israeli consul general in New York.