Has a Riot Bloomed Into an Insurrection? 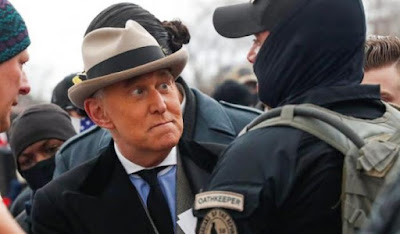 Before volcanoes erupt there's normally plenty of warning. The volcano goes from dormant to active in stages. Precursors include an increase in the frequency and intensity of earthquakes, steaming or "fumarolic" activity, swelling of the ground surface, that sort of thing. It can go on for days and doesn't always culminate in an eruption but, when that occurs, it follows warning signs. Civil unrest can follow a similar pattern of escalation.

The riot that led to the storming of the Capitol building on January 6th may have signaled worse things to come. The riot may be turning into an insurrection.

Militia groups involved in the 6 January insurrection want to stage another attack around Joe Biden’s upcoming address to Congress, aiming to “blow up” the complex and kill lawmakers, the acting chief of the US Capitol police, [Yogananda Pittman] has warned.

“We know that members of the militia groups that were present on Jan 6 have stated their desires that they want to blow up the Capitol and kill as many members as possible,” Pittman said.

The FBI and other law enforcement agencies are tracking closely far-right online chatter for early warnings on any possible repeat attacks in Washington or other cities. In addition to Biden’s upcoming congressional address, law enforcement will also be on alert on the days leading up to 4 March – the date set by the extreme conspiracy theory QAnon for Trump to return to Washington to start a second term as president.

Followers of the crank movement have been growing increasingly agitated by the fantasy around Trump’s comeback on 4 March, the date on which US presidents were originally inaugurated.
The theory of insurgency has been extensively researched and analyzed. Like full-blown revolutions, each is distinct yet all follow similar paths, pursuing similar objectives. Entry-level begins with terrorist movements and cells that, if successful (i.e. survivable), can grow into guerrilla movements that draw on broader public discontent for support before turning into insurgencies that, if successful, can become civil wars. The progression is marked by measures such as control of territory, establishment of alternative authority including taxation, judicial systems, etc., and, ultimately, displacing government forces and authority from "liberated" territory.
It's almost impossible to imagine America's militias ever growing to become a serious threat to the authority of the state. What political objectives can they hope to achieve? How could they force their will on federal and state governments? Maybe they're content to just "blow shit up" and see what happens. These militias pre-date Timothy McVeigh and the 1995 Oklahoma City bombing by many years despite the prominence of America's police and national security apparatus.
The really chilling alternative is the emergence of a latter day Brown Shirt movement, muscle for America's radical right that has now taken over the Republican Party. Maybe Oath Keepers, Proud Boys and the rest of the rabid white nationalists aren't the insurgency. The insurgents may already be in Congress.