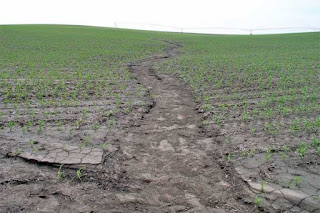 It is not easy to keep up with change undermining global food security. Soils degradation is a prime culprit. Some countries, such as large areas of India, have literally worked their soil to death through intensive agriculture propped up by heavy applications of agricultural chemicals - fertilizers, herbicides and pesticides. Crop yields have taken a further hit from the steady loss of groundwater reserves, aquifers that are starting to run on empty.

No country is immune to soils degradation, not even our own. The United States has a serious problem.

More than a third of farmland in the U.S. Corn Belt — nearly 100 million acres — has completely lost its carbon-rich topsoil due to erosion, according to a new study published in the journal Proceedings of the National Academy of Sciences.

The study, led by scientists at the University of Massachusetts, Amherst, found that the greatest loss of carbon-rich topsoil was on hilltops and ridgelines — indicating that tillage, or the repeated plowing of fields, was largely to blame as loosened soils moved downslope. The research also found that this erosion has removed nearly 1.5 petagrams of carbon from hills in the Corn Belt. Restoring the topsoil, the study’s authors argued, could help productivity and potentially turn agricultural fields into carbon sinks.

Despite this growing evidence, no-till agriculture still makes up just a small portion of U.S. farming. Less than 15 percent of farmland in the upper Mississippi River watershed, the heart of the Corn Belt, is farmed with no-till practices. Nationwide, in watersheds from the Colorado to the Delaware rivers, just 21 percent of corn, soybean, cotton, and wheat fields are continuously farmed with no- or strip-till practices.

Scientists warn that unless farming methods change, U.S. soils will continue to become denuded. And as crop yields decline, farmers will have to increase fertilizer use, further worsening water quality for streams and rivers.
The Corn Belt is a major source of feed for American livestock, especially hogs and poultry.