Did I Hear This Right? Montreal Lifts Covid Restrictions. Third Wave Weeks Away? 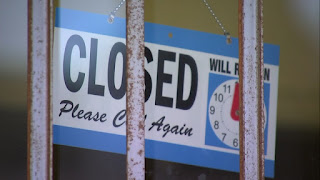 It's not easy to stay current with Covid developments in Canada, province by province, and yet it's at the provincial level that many of the boneheaded decisions are taken.

In Alberta, Jason "Wrong Way" Kenney is catching hell for ignoring a Covid outbreak at a packing plant for three weeks while 300 people became infected. Kenney didn't even try to respond to reporters, referring them instead to Alberta's medical officer of health.

In Ontario, Toronto had to implore Doug Ford to keep the city under lockdown for another two weeks. I'm not sure quite what that says about the premier but I can't imagine it's good.

Then we come to Montreal. The Quebec government is planning to lift the lockdown. Provincial modelling says the province can withstand an anticipated wave of Covid variants if Quebeckers "follow the rules."  The Gazette reports the province faces an outbreak of the UK variant that could send infections in Greater Montreal to spike to 2,000 cases per day.

None of this is to suggest the federal government is a model of competence. It's not. In the context of what are considered our "peer" countries, we're not doing well at all responding to the pandemic especially on vaccine rollout. People can cherry pick numbers but the bottom line has to be vaccine doses in arms. Vaccine doesn't work on order.  Promises are assuring but they don't thwart infections.

Like climate change, understanding this pandemic is difficult until you penetrate the blanket of political bullshit that, sadly, controls the narrative. Justin Trudeau isn't going to tell you where he screwed up and how badly. Neither is Jason Kenney. Neither is Doug Ford. No premier will. If they did their voters might be a lot less confident in their decisions to lock down and unlock economies, economies that now fluctuate like a block of wood floating atop undulating swells.