A Little Late, Nikki Haley Tries to Grow a Pair 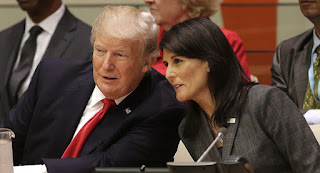 Former Trump acolyte, Nikki Haley, has had an epiphany, a truly religious-grade conversion. Haley now says it was a mistake for Republicans to have backed Donald Trump and his presidency.

"We need to acknowledge he let us down," Haley, who served in her ambassador role under Trump, said. "He went down a path he shouldn't have, and we shouldn't have followed him, and we shouldn't have listened to him. And we can't let that ever happen again."
The former South Carolina governor told Politico that she has not spoken with Trump since the mob attack, further expressing her disappointment with remarks Trump gave at a rally ahead of the riot condemning his own vice president, Mike Pence.

"When I tell you I'm angry, it's an understatement," Haley told Politico. "I am so disappointed in the fact that [despite] the loyalty and friendship he had with Mike Pence, that he would do that to him. Like, I'm disgusted by it."