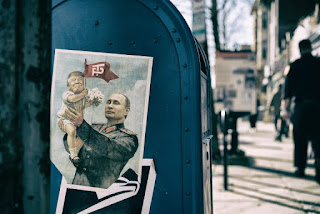 It has become popular in  some circles to dismiss all the evidence that Donald Trump was, perhaps unwittingly, in service to the Kremlin. These types seem to overlook how much Trump did in his four years in the White House to weaken America's institutions and fray its relations with the country's historic allies. He sought to undermine NATO and the European Union. He aligned the United States with anti-democratic and authoritarian regimes from Asia to the Middle East and Europe. Like it or not, Trump was the Kremlin's waterboy.

Now a former KGB spy is speaking out, claiming that Trump was cultivated as a Russian asset for more than 40 years.

"Yuri Shvets, posted to Washington by the Soviet Union in the 1980s, compares the former US president to “the Cambridge five”, the British spy ring that passed secrets to Moscow during the second world war and early cold war.

"Now 67, Shvets is a key source for American Kompromat, a new book by journalist Craig Unger, whose previous works include House of Trump, House of Putin. The book also explores the former president’s relationship with the disgraced financier Jeffrey Epstein.

“This is an example where people were recruited when they were just students and then they rose to important positions; something like that was happening with Trump,” Shvets said by phone on Monday from his home in Virginia."
The past four years have seen a masterful effort to disarm Trump's Russia critics. The Steele dossier we've been led to believe is pure nonsense whereas much of it has been verified as accurate. There's a fine book published in 2019 by the founders of Fusian GPS, "Crime in Progress: Inside the Steele Dossier and the Fusion GPS Investigation of Donald Trump," that is a must read for those who scoff at Steele's work. If you can't find it in your library it's available from Kindle.