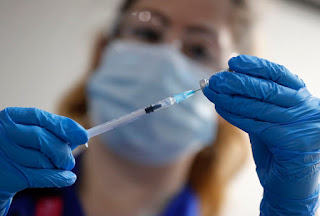 Wouldn't it be great if Canada still had a world-class laboratory manufacturing vaccines? We did but we don't, not any more.

Word coming out of the UK that the more contagious Covid variant that's now spreading around the world is also more deadly. That warning comes from none other than Britain's beleaguered prime minister, Boris Johnson.

Mr Johnson told a Downing Street briefing: "In addition to spreading more quickly, it also now appears that there is some evidence that the new variant - the variant that was first identified in London and the south east - may be associated with a higher degree of mortality.

"It's largely the impact of this new variant that means the NHS is under such intense pressure."

Thanks to the neglect of Canadian prime ministers going back to Mulroney, Canada's world class pharmaceutical company, Connaught Labs, is no more. We threw away that critical resilience when our governments allowed it to be sold. Privatization, don't you know. Shrink government. Everyday low taxes.

Canada thought we had the problem under control with the government contracted with Pfizer and Moderna for the supply of large quantities of their vaccines. Except a vaccine on back order isn't a vaccine delivered. It isn't a vaccine in someone's arm. It's a promise of a vaccine - eventually.

When word arrived that Pfizer had a glitch in production, it took Canada and many other countries by surprise. Prime minister Trudeau, cap in hand, joined the queue of world leaders to beseech the Pfizer CEO to resume deliveries.

"The next few weeks will be challenging when it comes to deliveries," Trudeau told reporters. "That said, Dr. Bourla assured me that hundreds of thousands of Pfizer doses will be delivered the week of February 15 and in the weeks to follow."

"Challenging." WTF does that mean? It means, as far as Pfizer is concerned, we're well down its priority list. The EU will be back up to speed by January 25th. Pfizer will get around to resuming deliveries to Canada by the middle of next month.

Mr. Trudeau said that, by the end of March, Canada will have received four million doses of the Pfizer vaccine, enough to vaccinate an underwhelming two million of our 37 million people, a staggering 5.41 per cent.