The Bloom Is Off the Rose, the Wild Rose That Is. 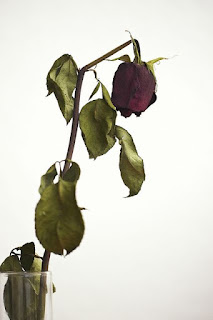 For some time Alberta has been a provincial Ponzi-scheme, robbing the future to pay dividends today. Tens of thousands of orphan wells, dangerously contaminated groundwater and those Tar Sands tailing ponds are Alberta's IOU for its future generations.

But, as has been foretold repeatedly - and repeatedly ignored - the era of fossil energy is drawing to a close. Alberta loves to blame Ottawa for its woes but it is world oil prices, that are definitely not set by Ottawa, that undermine Alberta's once mighty natural resource. High-cost/high-carbon/low-value fossil fuels are becoming economically unviable.

Alberta has already seen a Tar Sands exodus by major fossil energy companies and investment houses. That wasn't Ottawa's doing. To maintain the illusion that Tar Sands bitumen remains a successful venture both Alberta and Ottawa have had to throw billions into rescuing pipelines that the private sector won't touch. The invisible hand of the market has pulled back from bitumen pipelines. It's all very sad, even pathetic.

When boom towns turn bust who leaves first? What groups pull up stakes and move on, leaving the rest behind?

According to The Tyee, Alberta is seeing an exodus of the best and the brightest - doctors, entrepreneurs and business people are gathering up their families and leaving. Even the "Alberta Advantage" no longer cuts it.

Alberta is beset by problems. The economy is weak. The province is facing a record-high deficit exceeding $20 billion. While other provinces have recovered many of the jobs lost during the pandemic, Alberta’s unemployment rate was 11 per cent in December.

Perhaps more alarming, though, is the loss of Alberta’s greatest resource. And no, it’s not oil.

The article goes to some length about medical professionals and entrepreneurs who are pulling up stakes and relocating to Kelowna or Richmond or Victoria, accepting the higher taxes and higher real estate costs as a price worth paying to get out from under Kenney's UCP and its myopic economic and healthcare policies. Many of them say they're gone for good and have no interest in ever returning to Alberta.

Alberta needs an economic makeover and Canada has a responsibility to help but only if Jason Kenney or whoever succeeds him is willing to make some difficult changes. Angry recriminations will not help Alberta. Ottawa is no longer a useful whipping boy.