Public Confidence in Trudeau is Flagging 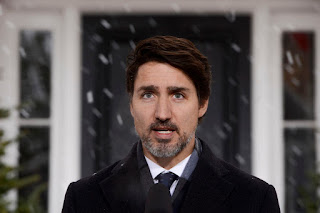 The longer the Covid vaccine fiasco drags on the worse it becomes for Justin Trudeau.

Mr. Trudeau has been long on assurances, the more vague the better, but falls far short on results.

The bottom line is the percentage of the population vaccinated. The UK leads the way with 10% vaccinated, by some accounts that's 12%. The US, which despite its supposed rollout fiasco, still has a respectable 5%. Canada, at 1.1% comes well behind Malta, Denmark, Slovenia, Spain, Ireland, Lithuania, Portugal, Iceland, Serbia, Romania, Italy, Cyprus, Estonia, Switzerland, Germany, Austria, Poland, Czechia, Slovakia, Finland, Hungary, Croatia, France, Greece, Belgium, Sweden and Norway.

Yes, as Mr. Trudeau regularly reminds us, Canada has many tens of millions of vaccine doses on order. In today's Guardian there's a lovely graphic of which countries have contracted for how much vaccine by number of doses per resident.  The UK orders equal 5.5 doses per person. EU, 3.5. US, 3.7. Japan, barely 2.3 doses per capita. Wait for it - Canada tops the list with orders for 9.6 vaccine doses per person. 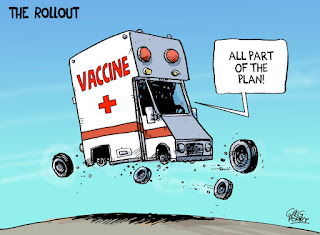 Those who were lulled into thinking the federal government was on top of the crisis gave Mr. Trudeau high marks. There was even talk of an early election to allow the Libs to reap the benefits of their newfound popularity. Six weeks ago it looked like a sure bet. That was then, this is now.

Angus Reid released new polling numbers this morning. Mr. Trudeau's approval numbers have dropped from a high of near 60% to just 45%. Overall, 75% of respondents said the government has done a poor job of handling the pandemic. Imagine what they'll be like in another month. The overarching issue of the past year and the government is blowing it - badly.

That's the price to be paid when a smarmy politician overpromises and then under-delivers. Many people have been effectively locked down since March and Covid-fatigue is wearing on them. Canada's numbers speak for themselves. 1.1 per cent vaccinated, real bottom-rung performance. We're trailing badly behind Slovenia and Romania for pete's sake.

An entry on some order book does not save lives. It does not help restore the economy. 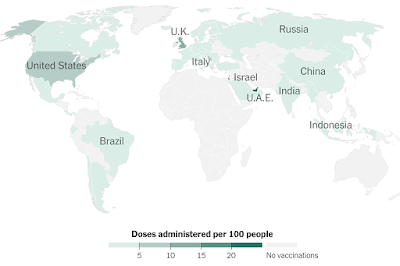