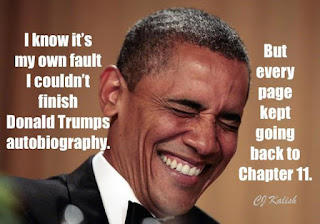 Before Donald Trump departed Andrews Air Force base yesterday, he told the relatively small gathering of well-wishers that he would be back "in some form." That cryptic line sparked a lot of speculation.  There was talk about a Trump TV channel to compete head to head with Rupert Murdoch's feckless FOX News.

The Wall Street Journal claims Trump is considering forming a breakaway political party, the Patriot Party, that would draw radical rightwing candidates to take seats in the House and Senate. Presumably the Mango Mussolini plans to bleed the Republican ranks as payback for what he sees as the party's betrayal over the election. I expect he's planning to poach the Treason Caucus from the GOP.

I so wish Trump would do this. Either way it would be a great thing for America. If it failed it would likely consign Trump to obscurity. If he won, it would gore the GOP and split the rightwing vote, opening a path for the Dems for a decade or more.

Two areas in which Trump has unrivaled expertise - losing money and leaving investors and creditors holding the bag. I don't know how that would benefit the Patriot Party but I'd pay a buck and a quarter to watch.