Mr. Trump, May I Introduce You to Michelle Carter 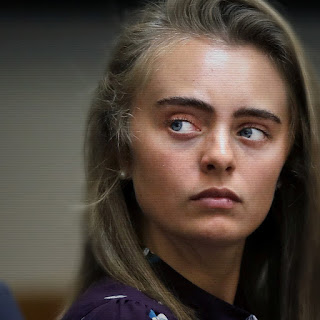 Words have consequences. Each of us is deemed by law to intend the logical and foreseeable consequences of our actions.

Around this time last year Michelle Carter was convicted of involuntary manslaughter for cajoling her supposed boyfriend, Conrad Roy, to take his own life. Evidence showed that Carter, then 17, relentlessly texted Roy, goading him to commit suicide. In a final telephone call, Carter ordered Roy to fill his truck with carbon monoxide fumes.  Roy did just that in a K-Mart parking lot in Fairhaven, Massachusetts.

Trump is equally guilty of inciting yesterday's wave of domestic terrorism against Congress. I endured his entire one hour, ten minute harangue of the crowd of thugs that showed up to hear him speak. Again and again he depicted the election as having been stolen. He assured the horde that their votes had been stolen, blaming, by turns, the evil media, the Democrats, weak and disloyal Republicans at both the federal and state levels, the Department of Justice, former A.G. Bill Barr, Senate Majority leader, Mitch McConnell, even the Supreme Court. He repeatedly told the crowd their votes had been stolen by these enemies of the people, enemies of the faithful. Then he said that senators and representatives were about to meet to confirm this iniquity and hand the country to Joe Biden, Kamala Harris and the socialist Democrats. He looked at the crowd and said "We're not going to let that happen." Then he gave them their marching orders to swarm the Capitol building.

What happened, the terrorist attack on Congress and the Constitution, was entirely logical and foreseeable. To emphasize how intentional Trump's criminal terrorism was, he sat by for a couple of hours while the siege and then forced occupation of the Senate and House transpired. He could have gone to the Capitol and told his thugs to disperse but he chose not to.

Only later, when he realized his own party was turning on him, did Trump issue a video in which he urged his thugs to go home, telling them he loved them and they were special. Trump both inflamed his followers and incited their terrorist attack on the Capitol. Trump is guilty of terrorism. He also has the deaths of four people on his hands.

Michell Carter's homicide conviction will be with her for life. What she did was monstrous. Trump's crimes are infinitely worse and every bit as monstrous.